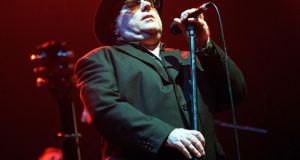 Van Morrison’s Madame George is the only tribute I know of, literary or musical, to the Dublin-Belfast railway line. Photograph: Terry Thorp

Reduced to vicarious travel, I have spent recent evenings on an epic train journey through my living room, courtesy of re-reading Paul Theroux’s 1975 classic The Great Railway Bazaar. At least I think it’s a re-reading. I found the old paperback in a forgotten corner of the bookshelves, dog-eared from previous use.

But I have only vague memories of reading it the first time, which must have been in the 1980s. Among its surprises now is the realisation that I have since taken some of the same trains he did, including the Orient Express (a mere tourist version in my case), the Delhi-Jaipur Mail, and – also in India – the miracle of engineering that climbs the Himalayas to the old British summer capital at Simla.

I also now know exactly what Theroux means when he describes the sole epiphany of a much shorter journey in Japan, ie that “the suburbs of Kyoto are also the suburbs of Osaka”: a thought he doesn’t have time to write down before the train arrives in Osaka, 14 minutes after leaving Kyoto.

There have been many other dramatic developments along Theroux’s route since the book appeared, including the break-up of the USSR

But there are many journeys in the book that I haven’t yet made in person, and the one that I most want to, after reading about it, is the Trans-Vietnam railway, which follows that country’s coast from what is now Ho Chi Minh City to Hanoi. Not that there was much of it left when Theroux visited. It had been mined to pieces by the Viet Cong and one of the bits he did travel had been machine-gunned a month earlier. A South Vietnamese official admitted they only kept the service open because “if we stop it everyone will know we’ve lost the war”.

Despite the fraught circumstances, Theroux was enraptured by Vietnam’s scenery, even as he lamented guiltily the mess the US army had left behind. Among the legacies were many small children with American features. On one train, a woman tried to hand him such a baby, a two-year-old she had found abandoned, expecting him to take it home.

The north-south railway has since been restored as the “Reunification Express”. And there have been many other dramatic developments along Theroux’s route since the book appeared, including the break-up of the USSR (he took the Trans-Siberian back to Europe).

But not the least dramatic illustration of the changes that have swept the world was evoked by another mention of babies – this time Theroux’s own sons, as remembered in Singapore where one of them had been born in 1970. The baby in question has since grown up to be film-maker Louis Theroux, now more famous than his father.

A smaller revelation of the book, also from Vietnam, concerned the phenomenon of local troops wearing leftover American uniforms that were always too big. Seeing a group of wounded soldiers on a train, Theroux was struck by the symbolism of them being abandoned by the US in their outsized clothes, something that suggested “travesty in its true sense”.

This forced me to look up “travesty” in etymological dictionaries, but I needn’t have, because its history is still visible in the word. The original is from the Latin trans (“across”) and vestire (to clothe). In 17th-century Italian, the verb travestire referred to the burlesque tradition of dressing in comic fashion. Thus travesty is a close relation of transvestite.

Which in turn reminded me that one of Ireland’s greatest ever songs is about a transvestite, “the one and only Madame George”, as Van Morrison puts it, whose ageing glamour and Bohemian lifestyle haunt the narrator as he leaves behind the world where s/he and it are set.

Or at least that’s what the lyrics seems to be about. Morrison would dismiss this and all other interpretations, saying he doesn’t know himself. The lyrics remain a mystery, officially, which doesn’t lessen their beauty and power.

But apart from anything else, Madame George is also a train song.

It’s the only tribute I know of, literary or musical, to the Dublin-Belfast railway line, although therein lies a conundrum too, because whereas Van was taking leave of a Belfast childhood, the haunted narrator appears headed in the opposite direction: “And you know you gotta go/On that train from Dublin up to Sandy Row”.