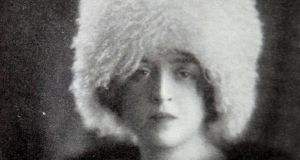 Insofar as Clare Sheridan was Irish, as she always claimed, it was in part thanks to her lack of formal education. Born in London in 1885, she spent childhood years in west Cork, where her father owned an estate.

Her time here would have been shorter if, like her brothers, she had been sent away for schooling. But according to her niece and biographer, Anita Leslie, this was not considered necessary.

“As the education of a girl was deemed unimportant,” Leslie wrote, “Clare spent most of her time at Inishannon, and revelled in the holidays when the boys reappeared. [Her father] was good with boys. He taught them to climb trees and peer into herons’ nests […] and he even showed some interest in his daughter when she revealed how well she could ride.”

Despite the early educational deficit, which appalled her mother, Sheridan grew up to enjoy an extraordinary career, in several disciplines.

The same biographer tried to sum her up posthumously: “She was beautiful, fearsome, an English aristocrat, a communist spy, a loose woman, an impossible parent, an inspired artist, a respected professional journalist, and a middling novelist.”

She was also, it must be said, well connected. Her cousins included Winston Churchill, and she inherited her middle name – “Consuelo” – from one of the Vanderbilts, her godmother.

Her reputation was so high that when she visited Moscow, several of the revolution’s leading figures sat for her

But she scandalised the British establishment, Churchill included, by expanding her circle to include Lenin and Trotsky, both of whose heads she sculpted (and turned, in Trotsky’s case).

She also met and liked Michael Collins, escaped a sexual assault by Mussolini, and had a love affair with Charlie Chaplin.

Irish as it was, the Sheridan part of her name came only through marriage, to an English descendant of the Dublin playwright Richard Brinsley. By birth she was Frewen, daughter of one Moreton Frewen, an Anglo-Irish adventurer whose many financial misfortunes led him to be nicknamed “Mortal Ruin”.

His estate at Inishannon aside, he played at least one notable role in Irish public life, as an MP in the All-for-Ireland Party, a nationalist but anti-Redmondite faction which attempted to reconcile unionists with home rule and flourished briefly, mostly in Cork, before 1914.

That same year, Sheridan’s daughter died in infancy and it was in making a figurine for the grave that her mother first developed a talent for sculpture. Then her husband was killed at the Battle of Loos. After that, doubly bereft but with the security of a widow’s pension, she launched herself as an artist.

By 1920, her reputation was already so high that when she visited Moscow, several of the revolution’s leading figures sat for her. They included John Reed, author of Ten Days that Shook the World, whose funeral she would attend soon afterwards.

Sheridan’s Moscow diaries launched her career in journalism, even if Churchill stopped talking to her for a while and MI5 opened a file

Lenin was a model too. He chided her about being related to Churchill and when, in apology, she mentioned “another cousin who was a Sinn Féiner”, he laughed and said it must be “a cheerful party” when they got together.

But it was her sculpting of Trotsky that left the deepest impression on both parties.  An affair developed and the romance may have been a factor a decade later when overtures were made to the Irish government to grant the by-then exiled Russian asylum. As in most European countries, he was refused.

Sheridan’s Moscow diaries launched her career in journalism, even if Churchill stopped talking to her for a while and MI5 opened a file.

Revisiting Cork in those years, meanwhile, she found her home place burned down, a fate shared with Michael Collins. She met him too, writing that he had the “stride of a giant and the physique of a bull”, although she feared he was too young for political leadership.

There was also something taurine about Benito Mussolini, when during an interview/sketching session in 1922, he approached her with “nostrils flaring, like an angry bull”. She fought off an attempted rape until his red-line phone rang. In Leslie’s account, the call was about a breaking crisis in Greece. Sheridan escaped, bruised, and a friend advised, “Get out of Italy while you can.”

Sheridan lived in Turkey and Algeria between the wars.

Then her son Richard died and, again turning grief into art, she became a wood carver, starting with his monument and developing her skills at a Native American artist’s colony in Montana.

After the war, she came “home” to Ireland. She also converted to Catholicism and spent part of the 1950s living at a Franciscan convent in Castleblayney, Co Monaghan. Her art in later life was mostly religious. She moved back to England eventually and died there, aged 84, in 1970.