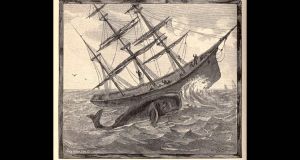 One of the more entertaining typos I have seen recently was in a press release about a man who was said to be available for interview although “based in Whales”. For a moment I marvelled at the image of this fearless cetologist and wondered how his mobile phone – the number was included – worked in there. But on closer inspection, it turned out, he was not a modern-day Jonah. He just lived in Swansea.

Naturally, the incident set me re-reading the biblical story, in which of course there was only one whale involved. And to say that Jonah was “based” in the whale might be an overstatement. On the other hand, his residency lasted three days and nights and appears to have been surprisingly comfortable. It may have been an air(less)bnb, but he spent the time there giving thanks for his delivery from drowning. When the whale finally evicted him, it was God’s idea, not his.

Two hundred years ago today, the crew of a Nantucket whaling ship called the Essex sighted an abnormally large sperm whale in a remote part of the South Pacific, where they had been struggling to find fish.

The whale was behaving oddly from the start and, before they could harpoon it, rammed the ship, rocking it but not causing serious damage.

After that, for a while, it appeared stunned. Then it recovered, swam some distance forward of the Essex, and turned to face the vessel’s bow. What happened next was recorded months later by the ship’s first mate, Owen Chase: “I turned around and saw him about 100 rods [500 metres] directly ahead of us, coming down with twice his ordinary speed […] and, it appeared, with tenfold fury and vengeance in his aspect. The surf flew in all directions about him with the continual violent thrashing of his tail. His head [was] about half out of the water, and in that way he came upon us, and again struck the ship...”

Such was the hole made on impact, the whale’s head became stuck in it temporarily, as he forced the ship into reverse. When he extricated himself from the wreckage, the Essex quickly sank, forcing the crew into whaling boats. Their nemesis swam off in the meantime, never to be seen again, so none of the sailors shared Jonah’s fate, although later they may have wished they had.

Their best bet would have been to head for the Marquesas Islands, 1,000 miles south but downwind. They decided against this, ironically, from fear that the natives were cannibals. Instead they made for South America, although it was twice the distance and upwind. So began an ordeal that a mere eight of the 21 survived, and only after resorting to cannibalism themselves.

At first, they at least waited for others to die naturally. Then even that was not enough. When they drew lots to decide who would be deliberately sacrificed, the “winner” was a young man with a suitably grim name, Owen Coffin. The survivors were still gnawing his bones – they had run out of food again – when finally rescued, 93 days after the sinking.

The grisly tale might have been forgotten – deliberately – in time, had Chase’s story not been read years later by Herman Melville, who also met him. The crew’s ordeal thereby became the inspiration for Moby-Dick, although whereas the sinking of a ship was the climax of that great novel, in real-life it had been only the start of horror.

A more recent non-fiction book, In the Heart of the Sea (2000), recounts the story of the Essex itself. That was turned into a film in 2015, with Cillian Murphy and Brendan Gleeson. Alas, it was not a box office success: bad reviews did for it what the whale did to the ship.

Getting away from whales, finally, I noticed another interesting typo during the week while following the Irish soccer team’s latest game via live text. It was provoked by their epic goal drought, which has now lasted for more than 10 hours of football since September 3rd. On which theme, and more in hope that confidence, the texter reported that Ireland were at least beginning to “eek out” chances.

Presumably, the verb intended there was “eke”, which means “to make the most of scarce resources” or “to earn a meagre living”. “Eek”, by contrast, is defined as an “informal exclamation of worry, alarm, or horror”. Which, by the way, brings us back to the man “based in Whales”. The event he was organising was a horror film festival, of all things. And there, perhaps, is a profession where you could be justifiably said to “eek out a living”.