Just as in 1847 during the typhus epidemic, frontline workers are risking their health to help the vulnerable 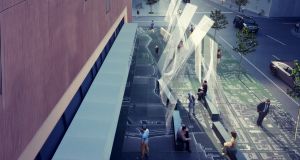 A digitally-created image of the plan for the Dr George Robert Grasett Park in Toronto. Dr Grasett was among the healthcare workers who made the ultimate sacrifice to help people less fortunate

On this day, July 16th, 1847 a doctor died while caring for his Irish patients. His name was Dr George Robert Grasett and he was the chief attending surgeon at the Toronto Emigrant Hospital in Ontario, Canada. He was appointed to his position on June 18th, volunteering to treat arriving Irish migrants suffering from a typhus epidemic. In less than a month, he succumbed to the very disease he had sought to treat.

On June 8th, the first 1,100 Irish Famine migrants arrived in Toronto, onboard the steamer, the Toronto. They were fleeing An Gorta Mór, The Great Irish Famine. The United States would be the ultimate destination for many of those who fled Ireland, but it is less well known that fear of disease meant that US ports were closed to the Irish in 1847. As a result, Canada became the port of entry and triage centre for the sick and dying migrants.

Dr Grasett was a compassionate man who cared deeply about helping those less fortunate. His obituary refers to his devotion to the 'amelioration of the sufferings of his fellow men, irrespective of hire or reward'

During that 1847 “year of sorrow”, 98,500 Irish men, women and children set out for Canada, a country of some two million people, on sailing ships fitted out for the transatlantic lumber trade, later to become known as “coffin ships”. The cramped and unhygienic conditions on board these ships vectored the rapid spread of typhus, for which there was no known cure. The loss of life at sea amounted to about 20 per cent of those who sailed away from the shores of Ireland. Others died not long after reaching North America. Their communal graves in New Brunswick, Quebec and Ontario are the largest known in the Americas.

In 1847, Toronto’s population was just 20,000. By the autumn of that year, some 38,565 Irish Famine migrants had landed on Toronto’s waterfront. This was a public health emergency and economic crisis of immense proportions.

By the end of 1847, some 1,186 men, women and children were dead from typhus in Toronto. Prior to the arrival of the Irish, Bishop Michael Power, Toronto’s first Catholic bishop, led an effort with city authorities in May 1847, calling for the construction of an emigrant hospital. To accommodate the expected influx, the Toronto Board of Health and other city authorities explored the construction of a purpose-built emigrant hospital on the peninsula that is now the Toronto islands.

A lack of time and money led to the repurposing of the Toronto General Hospital into an emigrant hospital. The demand for space necessitated an immediate expansion of the facilities. An observer noted that these sheds occupied “almost the whole of the vacant land” outside the hospital, which by August, accommodated more than 800 patients.

Dr Grasett was a compassionate man who cared deeply about helping those less fortunate. His obituary refers to his devotion to the “amelioration of the sufferings of his fellow men, irrespective of hire or reward”. A member of a prominent Anglican family in Toronto, he reached across the divide and volunteered to help the predominantly catholic Irish.

Dr Grasett and his fellow healthcare providers played a critical role in caring for the Irish. The essential medical and humanitarian services they provided to the migrants, many of whom are the ancestors of modern-day Canadians, laid the foundations for the Canada we know today. These individuals established a legacy of caring that defines Canadians. Sadly, within little more than a year after their deaths, their ultimate sacrifice was fading into the mists of time.

Reflecting on the same strength of character and the human spirit that compelled healthcare providers to sacrifice themselves to enable thousands of Irish migrants to recover and become contributors to Canada, we are reminded that together, we too will survive this pandemic

Ten years ago, work began to restore their names to memory. This summer, with support from the Government of Ireland, the federal government of Canada, the City of Toronto and the Irish-Canadian community, Ireland Park Foundation (irelandparkfoundation.com) had planned to officially open Dr George Robert Grasett Park (grasettpark.com), on the site of the old hospital, in the downtown core of Toronto.

This park will honour Dr Grasett and the medical professionals who gave their lives to care for the thousands of arriving Irish migrants. Coronavirus has delayed the opening of the park until summer of 2021 but, today, we are marking the occasion and taking inspiration from Dr Grasett’s service at the Emigrant Hospital.

Despite immense technological and medical advances, we are once again fighting a pandemic for which there is no cure. Just as in 1847, frontline workers of every faith and background are risking their health, and the health of their families, to help the vulnerable.

Reflecting on the same strength of character and the human spirit that compelled healthcare providers to sacrifice themselves to enable thousands of Irish migrants to recover and become contributors to Canada, we are reminded that together, we too will survive this pandemic.

Ireland Park Foundation hopes that visitors to Dr George Robert Grasett Park will learn from the sacrifices of these individuals, not just as a retelling of history, but as a demonstration of the foundations of the best of humanity in a park honouring the courage of all frontline heroes everywhere.

1 Covid-19 in Ireland: Colour-coded response set to replace phases
2 New Zealand considers freight as possible source of new Covid-19 cluster
3 Ireland among countries urged to consider reinstating Covid-19 restrictions
4 Brianna Parkins: My other half is trying to get me excited about spending a summer in Ireland
5 Donald Trump immediately targets Kamala Harris in campaign video
Real news has value SUBSCRIBE