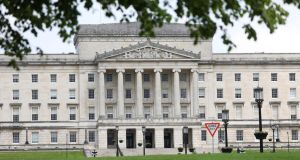 When the last detainees were released from Long Kesh in 1975, then SDLP leader Gerry Fitt said it would be a long time before the Catholic community in the North would forget the impact of internment.

But, he added: “The road is beginning to clear and we can take the first steps towards peace and reconciliation.”

There would be almost a quarter of a century of the bloodiest death and destruction, almost euphemistically referred to now as legacy, before another deal saw the two sides sharing an administration at Stormont again.

The Belfast Agreement of 1998 was a considerable upgrade on the failed 1974 Sunningdale experiment, but it has had stops, starts, reboots and more over the last 22 years. Its flaws were again laid bare in the aftermath of the Bobby Storey funeral.

The basic principles of the agreement remain sound, with formal recognition of two identities, both accommodated in a devolved administration. But it was achieved with a degree of constructive ambiguity which allowed both sides to get it approved by their respective communities.

Today’s challenge of a more sustainable system will mean moving beyond a peace deal into meaningful engagement about a “shared island”, and what it really means.

Many suggest that the best Northern Ireland can hope for is to accept unionists and republicans are never going to agree, and just get on with sharing things with as little trouble as possible. This is at best pessimistic.

If we want to avoid the continuing circles of 1974 and 1998, it will involve some soul searching and finally facing up to an uncomfortable discussion within civil society generally, and not just the main political blocs which tend to be polemical in their approach.

The north-south, east-west relationships and internal demographic changes inside Northern Ireland have shifted over time, particularly impacted by Brexit, making the debate a very different one to the days of Gerry Fitt. It’s already a new Ireland in that sense.

Unionist leadership resists the idea of a Border poll, claiming it would be divisive, and comfort themselves in the belief that they would win it anyway. Of course, they know that once called, it will be a recurring theme. It would seem that feeling confident in the union isn’t fully expressed in this scenario. They would rather remain detached from the need to engage in apparently unnecessary speculation about changing the status quo.

They will take comfort in the new Taoiseach Micheál Martin’s assertion that there will be no unity referendum, but it would be a mistake for them to bank that and be complacent about his assertion that the future is about relationships.

There is an understandable tendency to assume that unionists will hunker down and have nothing to do with any notion of a shared island, with the perception that it is nothing more than a gateway to a united Ireland. The mood within unionism’s grassroots is always hard to gauge because its people’s natural default position is to not enter debate publicly, which leaves the field open for the strident voices.

The Slugger O’Toole website includes an occasional column from a “Fermanagh Orangeman” who recently wrote that “Orangeism, like unionism, has been corrupted with poor leadership” and “continually fails to see the big picture.”

And while Ian Marshall is no longer a senator, he does point out that in the Seanad he “wasn’t a voice for unionism, but a unionist voice.” Indeed, it’s important to note that no single voice speaks for unionism, it is not one homogeneous monolith.

Many grassroots unionists are increasingly disillusioned with Westminster. Even though a sort of cognitive dissonance allows them to somehow live with a border down the Irish Sea, there can be no denying an increasing lack of trust in London and English nationalism within a creaking United Kingdom.

A recent poll showed that unionists represent just 33 per cent of people in Northern Ireland, nationalists 23 per cent, and 39 per cent consider themselves neither unionist nor nationalist, a figure which, while a little down on previous polls, is still significant.

And yet we hear no plan to address ordinary unionist fears, no imaginative plan to give northern Protestants a vision of how a shared island would protect and respect a way of life they cherish, a culture and identity that’s important to them, or address their worry about losing the NHS and a standard of economic living.

A republican I know who is opposed to Sinn Féin believes that unionists in times past would have been prepared to consider a federal system, with the old Dáil Uladh idea giving regions such as Ulster a degree of autonomy.

Unlikely perhaps, but there should be a realisation that simply tagging the six counties on to the present 26 is not an attractive proposition for many, including some traditional nationalists and republicans in the North.

Some northern nationalists feel forgotten by their counterparts in the south and want a People’s Assembly to promote dialogue.

A new Ireland of equals needs to be more than a slogan.

Southern society is facing many problems of its own, which the coronavirus pandemic has not caused but only heightened, and it remains to be seen how seriously the new Taoiseach’s Government will take the policy of working towards a “shared island”.

The work will involve as much a challenge for the south as it does for the North. Martin’s time in the Department of Foreign Affairs should give him a grasp of the issues, and Simon Coveney built strong relationships in the North and Westminster, the Brexit tensions notwithstanding.

There is a real but uncomfortable debate to be had about a better future for everyone in Ireland, in which mindsets need to be challenged and people of all communities, including minorities, are convinced that this is an opportunity to forge a new normal in which all the children of the nation are valued.

Denzil McDaniel is a former editor of the Impartial Reporter, a newspaper based in Enniskillen