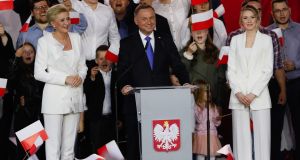 The map of Poland’s presidential election tells its own story. It is quite, quite starkly, west versus east, one in red, the other white, the frontier running straight down the middle. The west of the country voted for the liberal challenger and mayor of Warsaw, Rafal Trzaskowski, while the more conservative east opted for the incumbent Andrzej Duda.

There wasn’t much in it – Duda was re-elected with 51 per cent of the vote, according to preliminary results – but the outcome will sadly reinforce the country’s authoritarian drift under the Law and Justice Party (PiS) and prolong tensions between the European Union and its fifth-largest member.

That map naturally obscures regional nuances, but it’s clear that Poland is divided between a young, liberal, outward-looking and predominantly urban cohort who sided strongly with Trzaskowski and an older, largely rural section of the population, heavily influenced by traditional Catholic morality, who voted to re-elect Duda. A majority in the voting diaspora, including in Ireland, are in the former camp.

But while demographics favour the liberals in the long term – the younger you are, the more likely you were to vote for Trzaskowski – and while the challenger’s strong showing underlines the resilience of Poland’s progressives in the face of imposing institutional obstacles, not least a muzzled state media, the result is a demoralising reversal for those who hoped Poland could navigate its way out of the nightmare that has been PiS rule.

The conservative party’s five years in power have been marked by generous welfare programmes (which Trzaskowski had pledged to maintain) and a dismantling of the rule of law and democratic norms exemplified by the undermining of the judiciary and a de facto takeover of state television by PiS loyalists.

Duda has shown little inclination to stand up for Poland’s independent institutions by using his veto to stymie PiS legislation, and with parliamentary elections not due until 2023, the danger is that the ruling party can now embark on a more radical programme with the president’s blessing.

A divided country like Poland needs a unifying president; what Duda offered was precisely the opposite.

As the race tightened in recent weeks, he fell back on grimly familiar themes, calling the LGBT rights movement an ideology “more destructive” than communism, accusing his opponent of receiving support from shadowy foreign interests and offering himself as a bulwark against threats to Catholic values.

An election that could have offered Poland some respite after five bitter and tumultuous years has produced a result that will deepen the country’s fissures and speed up its estrangement from the European mainstream.