History shows article was drafted in a patriarchal and repressive environment 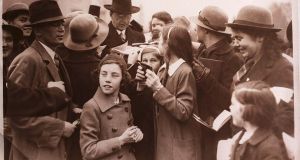 Among women: Eamon de Valera, the primary architect of the Constitution

Proposals to amend or remove references to a woman’s place being in the home from of the Constitution must not be limited to the advice of legal experts.

Legal considerations are important in any plan to revise the Constitution. But it’s crucial we don’t forget the historical context in which article 41.2 was drafted or ignore its social and economic impact.

The voices and experiences of women must not be not drowned out while the 38th Amendment of the Constitution (Role of Women) Bill is under review.

A referendum had been expected to take place on October 26th alongside the presidential election and a referendum on removing the offence of blasphemy from the Constitution but it has been postponed to allow the joint Oireachtas committee hold pre-legislative hearings.

Taken at face value it could be argued de Valera was right. In mid-20th century Ireland the majority of women did marry and work full-time at home

The wording of Article 41.2 states that “by her life within the home, woman gives to the State a support without which the common good cannot be achieved”.

It is further stated that because of this primary function as homemakers, mothers “shall not be obliged by economic necessity to engage in labour to the neglect of their duties in their home”.

In 1937 Eamon de Valera, the primary architect of the Constitution, claimed that “everyone knows there is little chance of having a home . . . if there is no woman in it, the woman is really the home-maker”.

Taken at face value it could be argued de Valera was right. In mid-20th century Ireland the majority of women did marry and work full-time at home. The historian Caitríona Clear has estimated that in 1946, some 54.5 per cent of Irish women worked at home rising to 60 per cent in 1961. Acknowledging the work done by women at home in the Constitution could therefore be seen as an important recognition of women’s unpaid domestic work.

But that ignores the patriarchal and repressive environment in which the constitution was drafted. It risks minimising the negative and discriminatory impact this article has had on Irish women’s lives over the past 81 years.

Historians and sociologists including Maryann Valiulis, Margaret Ward, Louise Ryan and Linda Connolly have documented the systematic attempt by government to limit the citizenship rights of Irish women between 1922 and 1937.

Examples include the 1927 Juries Act, which exempted women from jury service while allowing a woman to opt in if she so chose; the 1930s marriage bar for women teachers and civil servants (which required women to retire on marriage), and the 1936 Conditions of Employment Act which sought to limit the number of women employed in any given industry.

This stripping away of women’s rights was legitimised in terms of traditional gender roles. Women belonged in the home and so their opportunity to a life outside the home could be limited.

Having lived through the discriminatory legislation of the 1920s and 1930s, feminist campaigners were quick to spot the dangers inherent in article 41.2. Louie Bennett of the Irish Women’s Workers’ Union argued the phrase “life within the home” should be replaced by “work for the home”.

Doing so would limit the risk of women being restricted to unpaid work at home.

The Women Graduates’ Association stated that decisions about who went out to work should be left to the family without any interference by the State. The Joint Committee of Women’s Societies and Social Workers objected to any clause that could confine women “to their duties in the home”.

De Valera refused to budge. The 1937 Constitution was passed with article 41.2 intact. Awareness of the context in which this article was drafted is relevant to any debate about its future. The context justifies the view expressed by the Women Graduates’ that the new Constitution was ‘sinister and retrogressive’. Hanna Sheehy-Skeffington claimed the Constitution was based on a “Fascist Model, in which women would be relegated to permanent inferiority”.

In 1972 the public image of Irish femininity, the wife and mother, was a harmful cultural stereotype

Knowing how women’s rights had been compromised in the run up to 1937, her position makes a lot of sense.

In the decades after 1937, in school, at mass, and in public life, Irish boys and girls were taught that men and women had different social functions and that women should prepare themselves for marriage and motherhood. The majority of women, both married and single, who engaged in paid work did so out of economic necessity and found work in low skilled, low paid occupations.

The civil service marriage bar remained until 1973 and women continued to be paid less than men when they did manage to find work. For wives and mothers working at home, poor housing, low incomes and limited legal rights within marriage characterised the everyday lives of many.

In 1972 the Report of the Commission on the Status of Women acknowledged that the public image of Irish femininity, the wife and mother, was a harmful cultural stereotype. This narrow definition of women’s role led young girls to see their future in terms of a “relatively short period of gainful employment followed by marriage and responsibility for looking after the home and caring for children”.

In 2018 the role of women in Irish society has changed. Young girls have the right to choose how to live their lives. To inspire them we must delete article 41.2 from our Constitution.