Indefensible to force GPs to act against their will on abortion 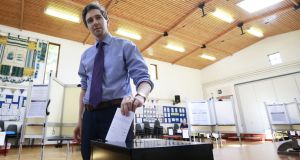 Minister for Health Simon Harris votes in the referendum on the Eighth Amendment in May: some 34 per cent of the electorate opposed the introduction of abortion. Photograph: Nick Bradshaw

The Government’s claim that freedom of conscience opt-outs for doctors are fully protected in the proposed abortion legislation does not stand up to scrutiny. While the proposed legislation does not compel doctors to directly participate in abortion procedures, it does compel those unwilling to provide abortion to establish contact with a colleague to enable the abortion to be carried out.

Under these circumstances, to claim that the legislation affords doctors an adequate opt-out clause is equivalent to claiming that someone who is opposed to female genital mutilation (FGM) in countries where it’s still legal should be compelled to refer women to a doctor who will perform the procedure. What’s the moral difference between carrying out the procedure yourself and ensuring someone else does it? There’s no real difference. The net result is the same: the FGM procedure is performed. Similarly, forcing someone with moral objections to abortion to arrange for the abortion to take place implicates them in the event, in this case, in the ending of an innocent human life.

It was reported yesterday that private polling carried out by GPs opposed to abortion suggests that there are about 500 GPs across the country (roughly one in five) with a strong conscientious objection to abortion.

The Government is ignoring the gaping defect in its claim that freedom of conscience is adequately protected in the proposed new law. They think asking Fine Gael parliamentary party members to parrot the line over and over to constituents that “freedom of conscience” is safeguarded is enough to allay public concerns and put the lid on any drawn out debate on the matter.

I know one GP who came under intense pressure from a fellow medic to abort her baby with Down syndrome but resisted, and now has a beautiful daughter

It is a manifestation of the triumphalism that has been in overdrive since the Yes side won, starting with the obscene spectacle in Dublin Castle where the victors roared and chanted for abortion. The Minister for Health Simon Harris, in particular, has shown no interest in understanding the legitimate and deeply felt concerns of doctors who don’t want to be forced to facilitate abortions.

The Government can hardly believe the 34 per cent of the electorate who voted no have vanished. They would be very mistaken to make that assumption. They represent one in every three voters and the fact that the Government won’t give way on an issue as basic as freedom of conscience is certain to galvanise these voters into a significant block in the run up to the next general election.

There are personal, as well as medical and ethical, reasons why some doctors don’t want to be coerced to refer women for abortions. I know one GP who came under intense pressure from a fellow medic to abort her baby with Down syndrome but resisted, and now has a beautiful daughter. She knows only too well how little regard some people had for her daughter’s right to life and she has no intention of becoming the kind of doctor that she encountered when pregnant.

The Government believes that she, along with other doctors, should be compelled by law to arrange for an abortion every time a request for one is made. There is something unspeakable about what is proposed.

The draft legislation defines abortion as “a medical procedure which is intended to end the life of a foetus”. The intent here could not be clearer in describing what’s being sanctioned. It doesn’t matter how many times the proposal is described as “healthcare”, intentionally and deliberately setting out to end the life of an unborn baby has nothing to do with genuine healthcare.

There are numerous peer reviewed studies indicating adverse effects of abortion on women’s health, and doctors cannot afford to disregard such evidence

TDs who intend supporting the Government’s legislation say they are only voting for what the public decided in the referendum. That’s simply false. The electorate voted to delete the Eighth Amendment from the Constitution and nothing more.

The Government has dismissed all calls for amendments to its legislation as an attempt to rerun the referendum. Yet no one knows better than they do that there was almost no debate during the referendum campaign regarding the precise consequences of what the legislation as currently set out would lead to.

The Government is bringing forward legislation that effectively devotes the resources of the State to persecuting doctors whose only offence is to obey their conscience and observe the Hippocratic Oath to “do no harm”. The legislation, as proposed, effectively coerces doctors to act in ways they deem unethical.

There are numerous peer reviewed studies indicating adverse effects of abortion on women’s health, and doctors cannot afford to disregard such evidence. Responsible doctors are professionally and ethically bound to serve the health of their patients, and this is not possible if they are legally obligated to subordinate their clinical judgments to the political mantra that abortion is always good for women’s health.

The way doctors and healthcare workers are being coerced to act against their conscience is abhorrent and indefensible. If the Government refuses to budge, the debate around freedom of conscience is set to become a major issue in the next general election, far bigger than they might anticipate.

Cora Sherlock is a spokesperson for the Pro Life Campaign