Kathy Sheridan: Drinking and lying catches up with Brett Kavanaugh 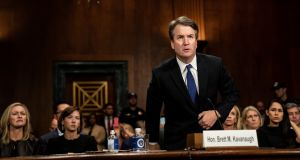 Of the many issues surrounding aspiring US Supreme Court judge Brett Kavanaugh, one of the most relevant to our culture is the trivialising of his youthful drinking – not just by the man himself and his tribal supporters, but by vast numbers of sympathisers.

As the high kings of the fun binge and keen followers of big court cases, we Irish know a thing or two about the mental disconnect between the misty eyed reminiscences of an epic “session” and the fall-out when it morphs into something darker and potentially life-changing for all involved. And still, tolerance of lads’ drunken antics remains high in certain circles.

In conversations around the Kavanaugh case, a typical male response is to focus on the feat of memory expected of an accused man. “I wouldn’t remember where I was this time yesterday never mind on a specific night when I was 17 with a few drinks on me. . .”

Neither would I. People expect something superhuman of poor Brett Kavanaugh. It was 1982. He was only 17. He had a few beers on him.

But his problem is entirely self-made. It was he who stated that he never drank so much he couldn’t remember what happened – despite his own comments in a high school yearbook which amount to a long, swaggering, teenage boast about drunken outings, drunken memory loss (“who won that game anyway?”), throwing up and pitiless pack taunting of a named girl.

When his accuser Dr Christine Blasey Ford described one of her sharpest memories of her alleged assault as the sound of the boys laughing at her, it probably seemed trivial to Kavanaugh fanboys. But that detail scorched the hearts of innumerable women who carry the scars of a jeering, boozed-up pack humiliation by such men. It would be a massive error to ignore it.

In his smug privilege, Kavanaugh made another massive mistake. He presumed too much on his old Yale drinking buddies’ class loyalty.

Chad Ludington became so “deeply troubled by what has been a blatant mischaracterisation by Brett himself of his drinking at Yale” that he issued a statement.

“When Brett got drunk he was often belligerent and aggressive. On one of the last occasions I purposely socialised with Brett, I witnessed him respond to a semi-hostile remark, not by defusing the situation, but by throwing his beer in the man’s face and starting a fight that ended with one of our mutual friends in jail.”

I have direct and repeated knowledge about his drinking and his disposition while drunk. And I do believe that Brett’s actions as a 53-year-old federal judge matter

We now know it happened in the early hours in a bar when a man told the group to stop staring at him. Kavanaugh cursed and threw what may have been ice or beer at the guy. A glass was hurled by one of Kavanaugh’s pals leaving the victim with a bleeding ear and the police being called.

So the guy who aspires to be only the 108th white man (out of a total of 113 since 1790) to be given a job till death in the US Supreme Court was no choirboy– but hey, stuff happens.

Ludington, himself a once hard-drinking fratboy turned college professor, is wary of being labelled a hypocrite. His problem with Kavanaugh is not the drinking as much as the judge’s bellowed, aggrieved,repeated lies that he was never any such person.

“I have direct and repeated knowledge about his drinking and his disposition while drunk. And I do believe that Brett’s actions as a 53-year-old federal judge matter.

“If he lied about his past actions on national television, and more especially while speaking under oath in front of the US Senate, I believe those lies should have consequences . . . I can unequivocally say that in denying the possibility that he blacked out from drinking, and in downplaying the degree and frequency of his drinking, Brett has not told the truth.”

The FBI can speak to scores of people in a few days. As for the memory challenge, 'FBI agents know time has very little to do with memory'

Which brings us to all the concerns about due process, criminal allegations and credibility. The FBI should have been called in immediately, of course, as is the norm. So why were they not? For an answer, watch that part of the Senate hearing where Kavanaugh fails to explain why he didn’t explicitly request or support such a step.

Now, thanks to a couple of women in a lift (whoever said protests were ineffective?) and a lone soon-to-retire Republican senator who finally listened, the FBI is investigating.

In what purports to be a search for truth, the investigation must be completed by Friday.

It can be done, says James Comey, the former FBI head, in the New York Times. The FBI can speak to scores of people in a few days. As for the memory challenge, “FBI agents know time has very little to do with memory. They know every married person remembers the weather on their wedding day, no matter how long ago. Significance drives memory . . .”

There’s a rallying call in there and more than a germ of hope. But for a clue to what drives the other side, watch the footage of Kavanaugh attempting to deflect key questions about his drinking. Watch him talk about beer. Endlessly. So much beer talk. Beer as a symbol of manhood, of poor working stiffs, down-home values. Beer, the drink of the regular guy worn down by political correctness who suddenly finds himself accused of sexual assault just for liking a few beers.

“Yes, we drank beer. I liked beer. Still like beer,” Kavanaugh recited several times in different ways, drawing a contrast with all those shouty, prissy liberals and their non-beer tastes. He likes a beer, does Brett. But unlike almost everyone else on earth who likes a beer, he alone remembers everything he has ever done under the influence of beer. It’s that winning combination of the good old boys, entitlement and alcohol.

What a role model for America – and the world.

1 Ireland should allow controlled spread of Covid-19 among under-60s, Swedish expert to tell committee
2 Ireland’s top earners ‘do not see themselves as rich’, study finds
3 Air travel never going ‘back to way it was’
4 Miriam Lord: Let’s call a spad a spad – this Government has woeful timing
5 Our neighbour says he has permission to build on our boundary wall. Can he?
Real news has value SUBSCRIBE