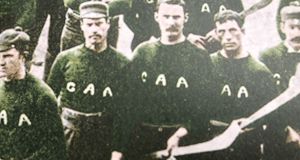 The exchange of letters is the starting point of ‘The Hurlers’, a fascinating new book by Paul Rouse about the origins of “the first All-Ireland Championship and the making of modern hurling”

Everybody knows that the GAA was founded in Hayes’s Hotel, Thurles, in 1884. Less well-known, although perhaps just as crucial, is a meeting that happened two years earlier in a famously upmarket venue in Dublin. The latter has been refurbished many times in the years since, but those of you with a print version of this newspaper are looking at it now.

Yes, reader, it was the letters page of The Irish Times.

The meeting began on December 21st, 1882, when a pseudonymous correspondent called “Omega” wrote in eulogising the ancient game of hurling, which he had played in his youth. It was now all-but unknown in the capital city, he lamented. But if it were to be revived and played again in the Phoenix Park, “ten thousand people” would come to watch.

As in many of the best conspiracies, Omega seems to have been part of a Gang of Four. That’s how few people in Dublin understood the game, he claimed. And it was almost certainly another of the quartet who wrote the first letter in response, next day, seconding the motion. This correspondent used his real name: Michael Cusack.

The exchange of letters is the starting point of The Hurlers, a fascinating new book by Paul Rouse about the origins of “the first All-Ireland Championship and the making of modern hurling”.

But the mystery is why Omega and his friends chose The Irish Times, then “a bastion of unionism” as Rouse says, to launch the sporting wing of a nationalist revival.

One explanation was the existence in Dublin of a game called “Hurley”, which sounds like the same thing Omega was talking about, but which moved in very different social circles.

Hurley seems to have been the product of a forced marriage between hurling and hockey. It borrowed some of its rules from the latter, including offside, and used only one side of the stick. They played it in such places as Dublin’s High School and King’s Hospital, and of course in Trinity College.

One newspaper enthusiast claimed it had transformed “the swiping game of the savage [ie hurling] to a scientific recreation which may be indulged in by anyone without being in constant dread of having one’s brains dashed out by an adversary’s hurl.”

Cusack was unimpressed, calling it a game for “civilised eunuchs”.

Even so, he and his friends must have coveted the foothold hurley had in Dublin and perhaps looked forward to converting the eunuchs to the real thing.

There is no evidence the GAA founder was anti-Semitic: that part of the character may have been borrowed from others

Sure enough, subsequent letters included one from a self-confessed hurley player who, while defending his game’s honour, also expressed interest in hurling. The same day, a certain “F.F.B”, wrote of having spent happy Sunday afternoons, “among the wilds of Connacht”, watching the local “peasants” hurl. He too foresaw thousands flocking to a revival.

The momentum was unstoppable now, at least for a physical meeting.

By December 27th, Omega was inviting all those interested to a gathering in the Royal College of Surgeons, the following Saturday, to see how they should proceed.

He especially hoped Mr Cusack would attend, calling him the “Alpha” to his own “Omega”. It had been a letters campaign in more ways than one.

Along with co-founding the GAA, Cusack would go on to achieve more dubious immortality as “the Citizen” in Joyce’s Ulysses. A Dublin version of the one-eyed Cyclops, he holds court in Barney Kiernan’s pub, preaching the glories of the Gael and the perfidies of the Saxon, while losing patience with the mild-mannered Leopold Bloom: “By Jesus, says he, I’ll brain that bloody Jewman for using the holy name”.

But as Manus O’Riordan and others have pointed out, Joyce’s Citizen was a fictionalised composite of several real-life people, and the extent to which he became identified with Cusack alone is unfair. There is no evidence the GAA founder was anti-Semitic: that part of the character may have been borrowed from others circa 1904, including Arthur Griffith. And if the later Cusack became the Fíor Gael of caricature, it was partly in reaction to the elitism of establishment sports, with which he was intimately familiar. He had taught in Blackrock College and Clongowes, among other places. He had played rugby.

And before embarking on his crusade to resurrect hurling, as Rouse notes, he had loved cricket above all else. It was a favourite topic of his column for the Shamrock magazine. Shortly before the Irish Times letter campaign, in the autumn of 1882, he reprised it, advising Shamrock readers how to season a bat using linseed oil and how to store it for the winter ahead.