Foster is rattling around inside a logical trap set by May

DUP leader Arlene Foster has warned its “red line” that there could be no Brexit deal that would divide Northern Ireland from the rest of the United Kingdom was “blood red”. Audio: BBC Radio 4 Today 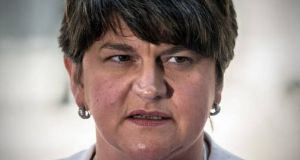 DUP leader Arlene Foster: The absurd over-reaction to her remarks, made off-the-cuff in response to a reporter’s question, indicates the extent of nationalist paranoia that the DUP is leading the British government by the nose

Trapped between a hard border and a sea border, DUP leader Arlene Foster has hit out at the Belfast Agreement. This has conceded a key rhetorical point to nationalists despite all the complaints they have made about her remarks. The point is not “I told you so”, as expressed in many quarters, over the DUP never supporting the agreement in the first place. The DUP will happily tell you that itself. As far as the party is concerned it fixed the Belfast Agreement with the 2006 St Andrews Agreement, and it was only then, with the text amended, that it climbed aboard.

The nationalist point Foster has conceded is that some forms of Brexit might be incompatible with the agreement, at least to the extent where it would benefit from further alteration.

Previously unionists have insisted no breach would occur under even the hardest Brexit – a claim that has the advantage of being strictly correct.

Brexit might impinge on how some parts of the agreement operate, but no part would need to be changed, let alone considered broken.

Constant references to the spirit of the agreement are facile without specific references to its text. All nationalists can cite in this regard is the British government’s general commitment to “remove security installations”, although that is made conditional on “the level of threat”, so Britain is fully entitled to reinstall security if republicans target Border infrastructure.

But, of course, nobody wants to see that scenario play out, however firm a legal footing the British government would be on. This is one reason why nationalists have lost all their Brexit arguments in court, yet won them in the court of public opinion.

Across Ireland and much of Britain it is barely questioned now that putting so much as a camera on a pole outside Newry would violate an international peace treaty. This view is so widespread it has become redundant to challenge it – if one side to a treaty has convinced itself a certain action is a breach, pursuing that action will wreck the treaty regardless.

Has the DUP leader now accepted this, if only to call for tweaking the agreement rather than Brexit?

It would be out of character for Foster to let nationalists redefine her reality. In fact, it was prime minister Theresa May who first conceded the nationalist point, trapping the DUP leader between borders and treaties.

In a keynote speech in Belfast three months ago, May ruled out a customs border in the Irish Sea as part of the backstop on the grounds it would breach the agreement by threatening the constitutional integrity of the UK and changing the status of Northern Ireland without consent, thereby denying “parity of esteem and just and equal treatment” to the unionist community.

This novel interpretation was seen as such a sop to the DUP that May was accused of letting the party write her script.

Legally, both sections of the speech were nonsense. The agreement makes no mention of the nature of the Border, while the consent principle only applies to a vote for a united Ireland.

However, by matching nationalist nonsense with unionist nonsense, May was boxing everyone in by turning their own arguments against them. Or, as she summed it up herself with a perfectly straight face, any new customs frontier inside the UK “would be a breach of the spirit of the Belfast Agreement, and for exactly the same reason that a hard border would be”.

The escape route the July speech left open was a regulatory sea border, carefully not ruled out or declared a breach of the agreement.

As the DUP faces the final squeeze towards that exit, it is no wonder Foster has implied she would prefer to alter the agreement instead.

The absurd over-reaction to her remarks, made off-the-cuff in response to a reporter’s question, indicates the extent of nationalist paranoia that the DUP is leading the British government by the nose. However, the intemperance of Foster’s remarks suggests the opposite – that the DUP knows that the limits of its influence are about to be exposed as the withdrawal agreement deadline nears.

A party that has never really suffered defeat or had to make a major strategic concession is going to find climbing down on something as totemic as a sea border extremely difficult to process.

Foster subsequently told the BBC her comments had been “blown out of all proportion”, and she had merely been reflecting that many changes have been made to the Belfast Agreement since it was introduced 20 years ago.

Asked what changes she thought might be needed due to Brexit, she ducked the question and referred to the consent principle – rattling around one more time inside May’s logical trap.