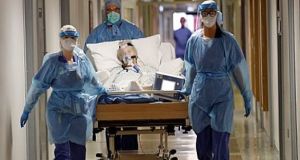 At present in Ireland it is as if we are driving the national motor vehicle towards a large tree. We have not yet changed direction enough to avoid it and we are heading towards a crash. Photograph: The Irish Times

Over the last three months in Dublin, we have seen the number of people with coronavirus go up steadily from two to five new cases each day to between 100 and 200 cases each day.

Admissions to hospital began to rise about 21 days ago and last week we saw admissions to ICU begin again. It is now inevitable, in my view, that sadly within the next week or two we will see rising numbers of deaths. These will continue to rise, mirroring about one two-hundredth to one twentieth of the number of new cases.

This is the beginning of the second wave in Ireland.

I accept that predicting future deaths from a virus based on our choices is morbid but not doing so is worse. Let me describe why I have come to these conclusions.

Since the first cases of coronavirus in Ireland early this year, the Health Protection Surveillance Centre has recorded 32,000 cases and more than 1,500 deaths definitely associated with the virus and 250 probably due to this. So about 5 per cent , or one in 20, of people who had the virus detected by Covid-19 tests died from it here. While deaths are accurately recorded in Ireland, there was delay and lack of testing in the early part of the pandemic, so we know that many people with the virus went undiagnosed.

The HSE’s antibody sero-survey concluded that 1.7 per cent of 16- to 65-year-olds had contracted the virus, equivalent to about 85,000 people infected, which brings the calculated death rate to about 2 per cent.

Spain is also experiencing a resurgence. Data from their ministry of health shows 80,640 cases over the last 14 days. These are mostly in younger people; 981 deaths were recorded during the same period. That is 1.2 per cent. We can expect that a greater number from that 80,000 cohort will die because it takes often a week or two or longer for the disease to progress from diagnosis to death.

There is a very similar pattern emerging in Sweden and the United States.

Inside Politics · Beyond the blunders, does this Covid plan make sense?

I am confident that the death rate in this second wave is likely be lower than in the first because we have more available testing capacity so a larger proportion of the people who get the disease will be diagnosed accurately and counted. We also have the benefit now of six months’ experience of how to treat people with it. We know, for example, know that the use of dexamethasone and the early and aggressive use of oxygen improves the outcome, perhaps by a quarter fewer deaths.

For the younger people who get it, the death rate will continue to be lower than in the elderly, or those with illnesses. So countries with a very young population, like some in Africa, will likely have a lower death rate. And on the other side of the equation, areas like Bergamo in Italy, where a lot of elderly people live, will have a much higher death rate.

Sadly though, if we let this virus infect large numbers of young healthy people, it will, without question, also spread to the older people in the community. We will see chaotic and frightening outbreaks in crowded hostels and in nursing homes.

Among health workers in Ireland, about one person in 1,000 who contracted the virus here died, so like the firemen running into the Twin Towers of New York, it takes courage to lead people into that setting and equal courage in staff to follow the leaders there.

As a community, we made extraordinary sacrifices to control our first wave. It was challenging and heartbreaking for many, but entirely necessary.

Together, we must now decide how we choose to deal with this second wave.

In my view, an effective response requires immediate and co-ordinated decisive actions from all five million of us, citizens and visitors, employers and workers, young and old, leaders in all organisations including those with power in our State to suppress and prevent the transmission of the virus here.

At present in Ireland, however, it is as if we are driving the national motor vehicle towards a large tree. We have not yet changed direction enough to avoid it and we are heading towards a crash.

With all of the information we have of where we are heading, and the pain we’ve already experienced, I think each and every one of us would make the choice to swerve safely away from the tree.

That is where we are at today as a nation, swerving away from a catastrophic crash into a tree.