The Irish Times view on the US election: Trump waits for his poll bounce 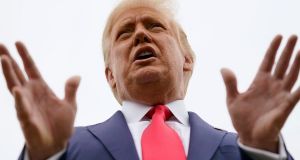 US president Donald Trump speaks to the media before boarding Air Force One for a trip to Kenosha, Wisconsin last Tuesday. Photograph: Evan Vucci/ AP

More often than not, US presidents fighting for re-election have benefited from a poll bounce in the aftermath of their party convention, a boost that traditionally brought support levels to a campaign high. Usually it has been down from there to election day in November.

Donald Trump is no ordinary candidate and has been known to defy historical trends. But it is not looking good for him. In the course of last week Democratic rival Joe Biden continued to lead him nationally, although the margin has tightened slightly since before the party conventions. According to four national polls released last Wednesday, Biden was retaining a lead of seven to eight percentage points. Enough to win the popular vote comfortably, although the contest in key swing states in the electoral college remains in the balance – like last time.

Trump’s hopes appear now to rest on securing a majority in the college despite a likely popular vote minority.

Unrest in Kenosha and Portland would appear to have played into the president’s agenda. But, crucially, the polls suggest that his attempts at the Republican convention to reframe the contest around law and order – more order than law, and with a strong subtext of racism – haven’t fundamentally reshaped the race to his advantage. Not yet anyway.

Both campaigns are now pumping money into ads and the level of personal vitriol on the issue is reaching new heights. Trump says Biden is soft on violence and a pawn of the anarchists and socialists who, he says, control major cities which the administration is now trying to defund. Biden says Trump is fanning the flames of division, causing the violence, and has been publicly excusing violence from his own supporters.

But in Arizona and Wisconsin, key states won by Trump in 2016, polls showed voters preferred Biden over Trump to handle the issues of policing and criminal justice by a five-point margin; in North Carolina, also Trump territory, voters were split down the middle on this. The law and order issue is not a certain winner for Trump.

This week both men will campaign in Pennsylvania, Biden’s home state and a Hillary Clinton loss that is now crucial to a Trump electoral college win. A local poll suggests that the latter remains competitive in the state, with Biden leading by just one to three points among likely voters.

There are two months still to go, but the picture at this point is negative for Trump. One of the polls last week showed a massive erosion of a key Trump constituency, suburban women. “If the president’s coalition is going to consist of non-college-educated white men, evangelicals and seniors,” says poll director Peter Hanson of Grinnell College, “then he’s going to have a hard time.”