The German chancellor’s decision to take in 1,500 refugees from the burnt-out Moria camp on the Greek island of Lesbos is a welcome and humane move 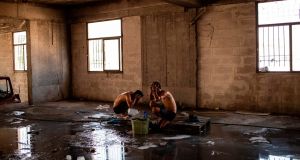 Migrants clean themselves inside an abandoned building near the Kara Tepe camp on the island of Lesbos on Sunday. Over 11,000 people – including some 4,000 children – have been sleeping rough since the notoriously overcrowded and unsanitary camp of Moria burned down last week. Photograph: Angelos Tzortzinis/AFP via Getty Images

Once again Angela Merkel has shown a courageous willingness to lead Europe from the front. The German chancellor’s decision to take in 1,500 refugees, families with children, from the burnt-out Moria camp on the Greek island of Lesbos is a humane u-turn by a government that in recent times has been less receptive to resettling refugees. But it was under pressure domestically after 57 of its towns and municipalities announced they wanted to accept refugees from the camp. Their efforts had been blocked by the government.

Moria, which went up in flames last week, was home to almost 13,000 asylum seekers, roughly four times the numbers of inhabitants it was meant to hold and now mostly shelterless. A grim bottleneck in the flow of desperate migrants from Turkey to Europe, the sprawling camp had become the most vivid symbol of the miserable effect of Europe’s closing doors and blind eye. Aid workers had long warned the camp was at breaking point.

In 2015 Merkel was widely praised and criticised for spearheading efforts to host refugees in Europe, opening Germany’s borders to hundreds of thousands displaced by war in the Middle East, Asia and Africa. Merkel’s spokesman insisted yesterday, however, the Moria move was a response to a “humanitarian emergency, a one-off emergency situation” and would not mean opening the door to more in the future.

But it is hoped the German decision can help prompt others to respond with similar generosity and reignite stalled Europe-wide discussion on a common resettlement system that can ease the pressure on frontline states like Greece. The European Commission is due to relaunch a debate that has been at an impasse since 2015-16, hobbled by the disgraceful refusal of several states to burden-share. An EU policy since 2016 of refugee containment and deterrence, of which Moria was a most visible expression, and which paid Turkey to keep the problem at bay, will no longer work. Rebuilding Moria and rehousing its inhabitants is simply not enough.

1 US presidential debate: who won, was it any good, were there any surprises?
2 US election: Joe Biden and Donald Trump clash in chaotic presidential debate
3 Miriam Lord: Another dog’s dinner as D’Arcy jumps on the gravy train
4 Gordon D’Arcy: If South Africa moves up north, it could all go south
5 Man unidentified in psychiatric hospital for 30 years may have DNA taken
Real news has value SUBSCRIBE