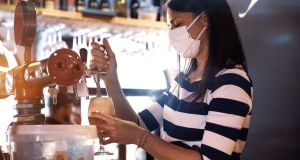 Premises must offer table service only, and must calculate the number of people who can safely be accommodated in line with social distancing requirements and put this figure on public display. Photograph: iStock

Bars and pubs which serve drinks only will be able to reopen in the North from Wednesday, September 23rd.

The North’s ministers gave the go-ahead to the reopening of so called “wet pubs” following a meeting of the Executive on Thursday.

The date is two days later than originally planned. The Executive said this was to “enable new regulations for the hospitality sector to be put in place to support their safe operation.”

The Executive also agreed a number of measures which must be in put place before a venue can reopen.

These include hand sanitising stations, the wearing of face coverings and the collection of customer details for contact tracing. Premises must offer table service only, and must calculate the number of people who can safely be accommodated in line with social distancing requirements and put this figure on public display.

The regulations will apply to any venue serving alcohol or where alcohol can be brought in and consumed by customers, the Executive said.

Localised restrictions which are in place in Belfast, Ballymena and some other postcodes were also extended to addresses in BT60, which includes part of Armagh City and runs from Markethill to Keady and the border with Co Monaghan.

The North’s Health Minister Robin Swann on Wednesday described scenes of house parties and on-street drinking in the area of south Belfast, which is popular with students, as “deplorable”.

Three prohibition notices were also made on properties hosting parties, police said, and a 20-year-old man who had previously been arrested in the area was detained again on suspicion of breaching his bail conditions.

Chief Insp Gavin Kirkpatrick said that in addition to “robustly addressing all incidents of antisocial of criminal activity, where appropriate, we will be sharing the details of students have failed to follow the Covid regulations with the universities, who will then consider a range of sanctions”.

In the 24 hours to Thursday, 149 new confirmed cases of Covid-19 were identified by the Department of Health (DoH) in the North, bringing the total number of cases to 8,780. This includes 689 new cases which have been confirmed in the last seven days.

There were no further coronavirus related fatalities. The total number of deaths recorded by the department since the beginning of the pandemic remains at 573.

The North’s First Minister Arlene Foster attended Thursday’s Executive meeting via Zoom after she revealed on social media she was unwell with what sources described as a “bug”. “I’ve been ill (just the flu) since Monday evening,” she wrote on Twitter. “Technology allows us to proceed remotely.”

The department said on Thursday that the R - or Reproduction - number of the virus in the North was currently around 1.2, and there had been, on average, 90 new positive tests every day over the last seven days.

The North’s Chief Scientific Adviser, Prof Ian Young, said this figure had increased and remained higher than in the Republic of Ireland and in the UK as a whole, though he added that testing was also higher in Northern Ireland.

“Over the last week, we have seen a plateauing in cases and an increase in hospital admissions,” he said. “The current increase in cases in younger people is likely to lead to increasing cases in the over sixties with resulting pressure on the hospital system and, tragically, increasing deaths.”

Provisional quarterly data released by the Northern Ireland Statistics and Research Agency (NISRA) earlier on Thursday found that Covid-19 was the underlying cause of 732 deaths between April 1st and June 30th.

This was fewer than the number recorded in the statistics produced weekly by NISRA - which count the number of fatalities which mentioned Covid-19 on the death certificate, whether or not it was the primary cause of death.

However, Thursday’s figures show that Covid-19 was the underlying, primary cause of death in 91 per cent of all deaths which mentioned coronavirus on the death certificate.

The NISRA figures are higher than those recorded in the daily statistics released by the DoH because the department counts only deaths were a patient has previously tested positive for Covid-19.