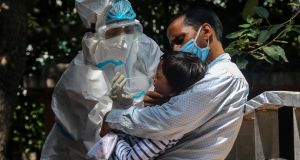 The Indian Medical Association said that 382 doctors had died from Covid-19 and demanded they be treated as martyrs – on par with soldiers killed on the battlefield.

Harsh Vardhan, the health minister, stoked doctors’ fury this week when he told parliament that New Delhi had no data on how many healthcare workers had died during the pandemic.

However, the IMA, which is tracking doctors’ deaths, said India had lost more to Covid-19 than any other country in the world.

It said that the government’s efforts to conceal the number of casualties had eroded its “moral authority” to dictate rules for combating the virus.

The IMA also pointed out that the fatality rates of infected doctors were nearly four times higher than that of the public.

“This indifference to the sacrifice of doctors and healthcare workers is the reality of Covid-19,” the IMA said. “It appears they are dispensable . . . To feign that this information doesn’t merit the attention of the nation is abominable.

“Doctors and healthcare workers not only get infected in the line of national duty but also bring home the infection to their families, including children. To treat these martyrs indifferently is a national sacrilege.”

The government has established an insurance scheme for healthcare workers infected with coronavirus but the IMA complained last month that the programme did not work and benefits were not reaching the intended recipients.

The rare public criticism of Mr Modi’s government came as the spread of the virus accelerated, putting a big strain on the country’s creaking healthcare system.

India is detecting about 97,000 new cases every day – the highest in the world. It has reported more than 5.2m infections since the outbreak, with only the US detecting more cases.

In recent weeks, India has also suffered more than 1,100 coronavirus fatalities every day, pushing its confirmed toll to more than 84,400 deaths.

Despite the steady rise in new cases, the national government and many Indian states have pushed for greater loosening of restrictions. They hope to revive an economy that contracted 24 per cent year on year in the second quarter, when the country was locked down.

Bhramar Mukherjee, a professor of biostatistics and epidemiology at the University of Michigan, said New Delhi appeared to have abandoned any serious effort to contain the pathogen.

Instead, she said, it was relying on frontline healthcare workers and overstretched hospitals to limit the number of fatalities as it waits for a vaccine.

“It looks like they have given up on trying to control the virus spread,” Dr Mukherjee said. “[They] are just counting on treatment to keep deaths down.” – Copyright The Financial Times Limited 2020