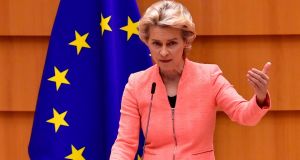 Ursula von der Leyen’s channelling of Margaret Thatcher – “Britain does not break treaties. It would be bad for Britain, bad for relations with the rest of the world, and bad for any future treaty on trade” – was particularly sweet. Only Winston Churchill ranks higher in the Boris Johnson pantheon.

In her first annual State of the Union address to MEPs, the European Commission president made no bones about the Brexit deal: “It cannot be unilaterally changed, disregarded or dis-applied. This a matter of law, trust and good faith.”

Her wide-ranging speech positioned the EU as a global player, the last line of defence of the rules-based multilateral world order: “Major powers are either pulling out of institutions or taking them hostage for their own interests.” Her targets were Russia and China, but also the US, although she hopes to “build a new transatlantic agenda”, presumably with Trump’s successor.

Her message was that the pandemic had created a new understanding of shared common purpose: “We have rediscovered the value of what we hold in common. As individuals, we have all sacrificed a piece of our personal liberty for the safety of others. And as a Union, we all shared a part of our sovereignty for the common good.” But like her predecessor Jean-Claude Juncker, she used the speech to set challenges to capitals and MEPs, a contrast between Commission ambition and implied foot-dragging.

MEPs were enjoined to fight member-state cutbacks in health spending to make a health union a reality. On global warming she promised again to increase the 2030 emissions reduction target from 40 to 55 per cent. She promised action on digital taxation, demanded an end to unanimity voting in foreign policy, and backing for EU-wide anti-racism measures.

Next week there will be new proposals on asylum seekers. “We will make sure that people who have the right to stay are integrated and made to feel welcome,” she said optimistically. How willing member states will be to follow her lead is another matter.