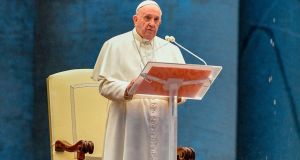 When this pandemic is over, some images will continue to haunt us, like the army trucks transporting coffins from Bergamo. Others will uplift us, like the Italians singing to each other from their balconies, or our neighbours out on their doorsteps applauding health workers. But I know one image will linger with me for a long, long time: a rain-slicked St Peter’s Square as dark is falling, where an old man in white, made slow by a painful hip, walks out into an eerie emptiness to give a blessing to the world.

From one angle, the figure of the Pope looked tiny, framed by a side-view of an ancient crucifix believed to be miraculous, that had once been carried in procession in the 16th century at a time of plague.

A much-venerated icon, Salus Populi Romani, an image of Our Lady and the infant Jesus, stood at the other side of St Peter’s Basilica’s door. This icon was brought to Rome in 590 by Pope Gregory the Great, whose predecessor, Pope Pelagius, had died from the deadly plague then sweeping through Rome. Tradition has it that the icon was painted by St Luke. That is unlikely, but it is ancient, possibly one of the earliest icons of Our Lady.

The sky turned a deep, dark luminous blue as the Pope once again entered the atrium of St Peter’s Basilica and began adoration of the Blessed Eucharist. The light streaming out was like a living depiction of the verses from the Gospel of John: “The light shines in the darkness, and the darkness has not overcome it.”

The Pope talked in his homily of how “thick darkness has gathered over our squares, our streets and our cities; it has taken over our lives, filling everything with a deafening silence and a distressing void, that stops everything as it passes by; we feel it in the air, we notice in people’s gestures, their glances give them away.”

He talked about how “the tempest lays bare all our prepackaged ideas and forgetfulness of what nourishes our people’s souls”. He said that it is not a time of God’s judgement, “but of our judgement: a time to choose what matters and what passes away, a time to separate what is necessary from what is not”.

Pope Francis has a genius for gestures that sail right over barriers, whether it be embracing a man with the disfiguring disease neurofibromatosis, where tumours grow all over the body, or letting a little girl with Down Syndrome climb into his chair and hold his hand at one of his addresses.

Someone tweeted after his Urbi et Orbi (to the city and the world) blessing that she is not very religious but even she recognises a boss battle when she sees one. (A boss battle is a gaming term for fighting a formidable opponent.)

When popular culture embraces something like a papal blessing, you know it has reached more than the usual suspects.

The prayer in St Peter’s Square has spawned a lot of memes, many of them affectionate, including the Pope holding a lightsaber, facing down Darth Vader who waits at the foot of the steps of the basilica.

Pope Francis’ almoner is also a boss, in a different sense of that word. The online magazine, Crux, describes how the Polish cardinal in charge of Pope Francis’ charitable works is driving hundreds of miles through quarantined Rome.  He picks up food from businesses and delivers it to the poor and to two Roman convents where dozens of religious sisters have been struck down by Covid-19.

Cardinal Konrad Krajewski (who has tested negative for the virus) claims he always wanted to be a milkman and now his dream has come true. In his own Vatican apartment, two homeless people and a Muslim woman prepare sandwiches for distribution to the poor.

The pandemic has led to many questioning what they believe and the priorities that they have embraced, sometimes blindly

He has reorganised the way he distributes food at Rome’s railway stations so that it respects social distancing, but the food was never more needed by the poor than now.

Both Francis and his almoner demonstrate that when people are hungry, you feed them. Feeding the spirit is not a luxury, even if feeding the body may be more imperative at times.

As parishioners are deprived of the chance to attend religious services, some churches are responding creatively, like the beautiful, meditative Taizé-style prayer streamed from Newman’s University Church at 6pm on Tuesdays. In a world where so much is jarring, distressing and frightening, people are seeking something that is deep-rooted and sustaining.

The pandemic has led to many questioning what they believe and the priorities that they have embraced, sometimes blindly. A few will move further away from the Christian faith. They will be convinced that a world where an invisible enemy can kill so many and damage so many more through the inevitable economic consequences, is not compatible with a loving God.

Others will rediscover their faith amidst a humbling awareness of how little we know, how little we really control in our lives and how easy it is to lose sight of what is truly important.