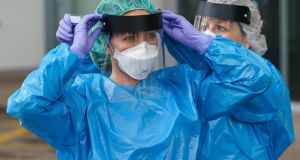 A healthcare worker adjusts the mask of a colleague outside the emergency entrance of the Burgos Hospital in Burgos in northern Spain on Thursday. Photograph: Cesar Manso/AFP via Getty Images

How long will this all go on? How long will we have to put our lives on hold? The question, repeated at government briefings around the world, is unanswerable. Weeks, months? All we can do, we are told, is work to slow the infection rate down.

Unstated but implied in the question is how long is the lockdown sustainable, economically and psychologically? As long as necessary; there is no alternative to sustaining it by whatever means. But will efforts inevitably be undermined before the pandemic is contained by “behavioural fatigue”, as British politicians warned in justifying the postponing of their initial lockdown?

Perhaps. There are already signs in Italy and Spain of growing impatience. Although a weekend poll showed some 63 per cent of Italians still back the government measures, armed police were deployed to supermarkets in Sicily over fears of looting. In Spain there have been scuffles over lockdown measures, though the majority are still adhering to them. But, as of last week, police had issued well over 100,000 complaints – which can lead to a fine – and detained more than 1,000 people for violating the lockdown.

In Ireland gardaí report remarkable levels of largely uncoerced compliance, with a recent poll suggesting 89 per cent favour of the current level of restrictions. But for how long? Behavioural studies on the continuation of protective measures during past epidemics, such as the H1N1 outbreak, seem to confirm that compliance tails off over the course of an epidemic, but it is unclear that there is more at work here than the well-established principle that compliance is a function of perceived threat.

That “perceived threat” is dependent on the quality of the government’s messaging strategy and how authoritative and credible it is. But behavioural fatigue is also not ultimately about boredom or restlessness in self-isolation, but a function of a range of challenges that make lockdown difficult to bear.

Sustaining family income is the most important – in developing countries and even the richest country in the world, the US, food poverty is driving people out of their homes to find ways to make ends meet. In the US demand for food aid has increased in some areas as much as eightfold and the national guard has been deployed to help food banks cope with rising demand in cities including Cleveland, Phoenix and St Louis.

Increased stress is also leading to a sharp rise in domestic violence, estimated to have risen by a third in France since the lockdown. To help tackle this, the government there has announced that it will be paying for victims to stay in hotels and has given women code words to alert chemists that they feel in danger.

This pandemic will only be fought on many fronts.

1 Luke ‘Ming’ Flanagan bares his bottom half to European Parliament
2 Double Standards for Men No 253: Lynn Ruane v Paul Mescal
3 Trump turns to bible for photo op as DC burns around him
4 Coronavirus: Public urged to stick with ‘tough’ restrictions to allow phase two proceed next week
5 Normal People: Full-frontal nudity was not its most radical feature
Real news has value SUBSCRIBE