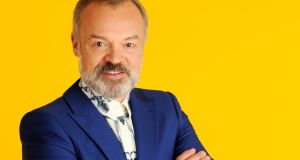 Graham Norton will host the BBC’s Eurovision: Come Together on May 16th

Europe in 1956 was a troubled place. East and west were entering a cold war, Hungary was quelling protests against the communist regime, Khrushchev denounced Stalin and the Suez crisis was on the horizon.

Emerging from the war years, there was widespread poverty, a feeling that the continent was falling between the gaps of the US and Russian superpowers, and the anxieties of the postwar period were still very much in force. From that emerged the foundations of the European Union: at its core a peace project designed to prevent a return to the destruction of the two recent world wars.

Also amid the anxious times for the continent emerged something more frivolous: the Eurovision Song Contest. Eurovision, now 64 years old, has a habit of creeping up on us. As the weather starts to warm, the evenings start to get lighter and pub gardens begin to fill up on long Sunday afternoons, the gaudy song contest finds its way on to our screens – one of the first signifiers that summer is well and truly on its way.

The BBC and the European Broadcasting Union have crafted some clever workarounds, bringing the Eurovision experience into our homes once again

And, even for its biggest detractors, it is hard to evade. Turning off the TV for one weekend at the beginning of May is easy enough to do. But you are then only affronted with myriad headlines, social media witterings and countless hours of radio dedicated to discussing the affair.

Luckily for some – and there are plenty who find no joy at all in the garish turbo-pageantry – the song contest has been cancelled this year thanks to Covid-19. Unluckily for those same people, the BBC and the European Broadcasting Union have crafted some clever workarounds, bringing the Eurovision experience into our homes once again.

On May 16th the BBC will broadcast Eurovision: Come Together, hosted by Graham Norton – a special montage show of memorable performances from the past. Meanwhile the European Broadcasting Union is producing an alternative – Eurovision: Europe Shine a Light – in the place of the final. Ola Sand, the executive supervisor of the contest, has urged EBU members “to air this show in the spirit of unity and togetherness”.

That spirit of “togetherness” was the founding motivation of the song contest – in many ways one of the first European endeavours, ahead of trading unions, a shared legal system and open borders. In much the same vein as the European Union, Eurovision was the continent’s answer to reuniting a wildly divided world in a postwar landscape. Though – as Janan Ganesh points out – “reunited” is an interesting choice of vocabulary: “as though Europe had only ever known cloudless stability before the world wars came along”.

The comparison is no doubt crass. The lofty intellectual foundations of the European Union share very little with a brassy song contest packed to the rafters with glitter and spandex. So too is it laughable that one of the clearest expressions of European solidarity is a few hours of Disney Channel-style cookie-cutter pop devoid of artistic merit.

As people are locked up at home, we have to admire the joie de vivre of those who believe it of crucial importance to deliver Eurovision to our screens

But there is perhaps some joy to be taken in the sheer determination of its organisers. As people are locked up at home, with little word from their governments – in the UK, Ireland and across Europe – on how they are devising an exit strategy, we have to admire the joie de vivre of those who believe it of crucial importance to deliver Eurovision to our screens.

And perhaps they have a point. With the news that Glastonbury, the Euro 2020 soccer championship and the Olympics have also been cancelled, we are facing months shorn of large-scale cultural events. These things alone are perhaps not of great significance – not least as a pandemic ravages the world, overburdens our healthcare systems and looks set to decimate our economies. Sitting in a waterlogged tent at a music festival in the south of England or travelling to Japan for an athletics contest certainly seem frivolous, and far down the list of global priorities.

But the BBC is set to re-air the London 2012 Olypmics opening ceremony; and is also looking at alternatives for Glastonbury over the coming weeks and months. Because at a time when people are adjusting to this new normal, a little bit of frivolity, and a reminder of what we used to enjoy and will enjoy once again is a breath of fresh air amid the otherwise crushing mundanity of it all.

And though we might find it hard to quell our scepticism of Eurovision’s founding purpose – to nobly promote unity amid division, in the campest way possible – there is no better time for us to be reminded of cross-border solidarity, no matter what shape it might take.

So Eurovision’s worthy return to our screens ought to be celebrated. And we should welcome the efforts to recast Glastonbury and sporting events to fit into an age of social isolation. We all need something to do – people are fast becoming bored of talking to one another about the various aspects of being locked in their homes. But more so – they are at best a joyful expression of solidarity, something always worth reminding ourselves of in troubling times, and at worst just harmless fun.