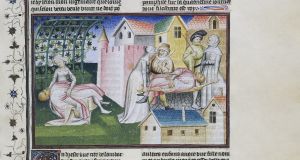 A 15th-century copy of Boccaccio’s The Decameron, which is set in 1348. Photograph: Getty Images

Among my lockdown reading material has been Boccaccio’s The Decameron, set during another pandemic – the Black Death of 1348 – and concerning 10 young people who escape plague-infested Florence to the countryside where they amuse each other by telling a story a day, for 10 days.

The results make a surprisingly racy collection, touching on love, sex, death, more sex, and the various kinds of corruption with which 14th-century Italy seems to have been rife. Also surprising is Boccaccio’s progressive attitude to women.

Seven of his 10 narrators are female. Indeed, it’s they who decide to get out of Florence because, as the author explains, plague or no plague, they live in permanent lockdown, emotional as well as physical: “[…]ladies are constrained by the wishes, pleasures and orders of their fathers, mothers, brothers and husbands, spending most of their time cooped up in the small space of their chambers, sitting there with next to nothing to do [and] all sorts of thoughts going through their minds . . .”

Boccaccio’s feminism should not be overstated. His women do bring three men from Florence, apparently to supply them with sense. After all, as one explains: “the man is the woman’s head and without male direction anything we embark upon rarely reaches a laudable conclusion.”

On the other hand, some of the subsequent stories subvert this with a vengeance. One starts with a group of Italian merchants in Paris, joking about the presumed infidelities of their wives at home.

Then a man from Genoa makes the mistake of suggesting that his is so virtuous he need have no such worries. Naturally, this leads to a bet with a cad from Piacenza who is sure he can prove him wrong. Whereupon the trusting Genovese agrees to stay in Paris for three months –the way you would – while the cad heads for Genoa. Long story short, the heroine defends her virtue so resolutely that the would-be seducer resorts in the end to faking his triumph. The Genovese pays the bet and, in a rage, arranges his wife’s murder. Happily, she escapes that fate long enough to be vindicated and in the end achieves such moral superiority over her husband that, for the rest of his life, he may as well be on a lead.

Readers are advised not to try any of that at home, no matter how long the current lockdown lasts. The stories aside, meanwhile, Boccaccio also includes a brief account of the events that led to him writing the book. And even at the remove of seven centuries, there are striking echoes with 2020.

During the plague in Florence, for example, “people rarely visited their relatives, if at all, and kept their distance when they did.” Of the countless funerals, he writes, not only were the robbed of their usual dignity, “but many [victims] left this life unwitnessed by anyone at all”.

Reactions among the living differed dramatically. Some hoped that seclusion “on a controlled diet of refined food and quality wines” would keep them healthy. Others laughed in the pandemic’s face, and – since pubs stayed open, obviously – went “from tavern to tavern, day and night, on an endless spree of uncontrolled drinking”.

That many of the Decameron’s tales mock the clergy, portrayed as venal, ignorant, and sexually profligate, reflects a real disillusionment with the church that is said to have set in afterwards. And yet Boccaccio doesn’t moralise much.

Another of his stories, for example, concerns a lusty young man who gets a job as gardener in a convent by pretending to be deaf and unable to speak. As he calculates, confidence of his silence leads gradually to him being ravished by all the nuns, up to and including the Mother Superior. Finally, the strain of combining the roles of gardener and farmyard rooster makes him fear for his life, so he exposes himself again, this time verbally. But it all ends well. Having played them for laughs, Boccaccio does not appear unsympathetic to anyone involved.

It was a different world then, of course, and a different Italy. An impending commemoration reminds me that the gardener’s fears of over-exertion may have been well founded. This coming Monday, April 6th, is the 500th anniversary of the death of Raphael, the great Renaissance painter, who lived like a rock-star, and died like one too, aged 37.

Covid-19 has wrecked plans to celebrate him, although we can admire his work online, at least. We can also read about his life, which we’re told involved many affairs. One account says he died of “fever”. Another blames “exhaustion brought on by unceasing romantic interests”.

1 Luke ‘Ming’ Flanagan bares his bottom half to European Parliament
2 Double Standards for Men No 253: Lynn Ruane v Paul Mescal
3 Coronavirus: Public urged to stick with ‘tough’ restrictions to allow phase two proceed next week
4 Normal People: Full-frontal nudity was not its most radical feature
5 Trump turns to bible for photo op as DC burns around him
Real news has value SUBSCRIBE