Breda O'Brien: Extraordinary measures need to be taken – even with Leaving Cert 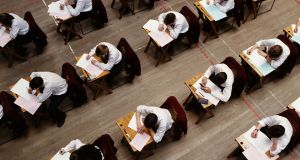 Given that some people are worried about whether they will be alive at the end of the Covid-19 outbreak, a change in exam conditions begins to take on its proper significance.

Minister for Education Joe McHugh’s announcement about awarding full marks for oral examinations and some practicals came as a shock to schools, students and parents. It underlines the seriousness of the threat facing us that this measure was contemplated, much less implemented.

There are obvious problems concerning fairness. For example, students who do not study either Irish or a modern foreign language, perhaps because of dyslexia, will be disadvantaged. They see that their friends are guaranteed a pass in Irish and well on the way to passing in other subjects.

It is difficult to see how grade inflation and a corresponding rise in CAO points will be avoided. Many hardworking students feel their lazier colleagues are being rewarded while their own hard work is being wasted. Others are simply delighted and feel that an immense pressure has been lifted.

Within a few weeks, our health system could be as overwhelmed as the Italian one

Whether they are diligent or otherwise, few students of Irish, foreign languages, or subjects with practicals will be impressed to be reminded right now that education is valuable in itself. Nor might they appreciate being told that being able to converse in a language other than English is not a skill that expires at the end of sixth year. We have created a bit of a monster in the current Leaving Certificate and we cannot blame young people if they are focused primarily on exams and CAO points.

However, we have to remember why this unprecedented step has been taken. We are living through catastrophic times. It is not unjustified to compare it to a war, with an invisible enemy that can attack at any time.

Lives depend on social distancing and self-isolation. Within a few weeks, our health system could be as overwhelmed as the Italian one. Healthcare professionals are braced for the biggest challenge of their lives, knowing that they are in the front line and very likely to either be casualties or to lose colleagues.

The Italian non-profit GIMBE Foundation, which conducts medical research, estimated on Tuesday that Covid-19 has infected 2,629 Italian health workers, or 8.3 per cent of the total cases (more than twice the percentage in China). Of 600 family doctors in Bergamo in northern Italy, 118 have been infected. Some nurses and doctors, including older people who came out of retirement to help, have died. And, of course, it is not just healthcare professionals; everyone, from postal workers to priests, has suffered infections and deaths in Italy.

These are grim, grim times and things will get worse before they get better. And even when a vaccine is found, it will take a long time for the world economy to recover.

In this context, extraordinary measures have had to be taken.

It might seem like there were other alternatives such as conducting orals via video links. In practice, this would generate high levels of stress among students who no longer have the same level of access to teachers to help them prepare.

It would also be difficult to implement in areas that are badly served not only in terms of internet access but also mobile phone signal. (Coincidentally, two areas where I spend time during the summer, one in the southeast and the other in the west, both fall into this category.)

Sometimes it can be difficult enough to motivate students that are sitting right in front of you. Students’ homes are rife with distractions

It is important to maintain a sense of perspective. To be brutal about it, students will be aware that people they love are at risk of serious illness or death, including students who have underlying health conditions.

Given that some people are worried about whether they will be alive at the end of this outbreak, a change in exam conditions begins to take on its proper significance.

These are challenging times for all of us, including teachers, but the desire to do our best for our students has motivated an outpouring of shared resources and distance learning techniques. Nonetheless, as ASTI president Deirdre MacDonald pointed out, sometimes it can be difficult enough to motivate students that are sitting right in front of you. Students’ homes are rife with distractions.

However, most students are smart enough to realise that while binge-watching Netflix’s entire catalogue (even with reduced streaming quality) may seem a better prospect than logging on to learn, that will quickly become very old.

Parents and guardians will now have to play a much bigger role in their child’s education, perhaps on top of trying to work from home and refereeing squabbles about technology between teens and tweens. No one is suggesting that it is easy.

Everyone knows that schools are not just places of education. They are communities, built on quick smiles and interactions in corridors, St Patrick’s Day céilís, and traditions such as graduation ceremonies, as much as they are on formal learning. It is not easy to replicate a school in cyberspace.

On the other hand, the kind of independent learning skills that students will now acquire will stand to them for the rest of their lives.

Those of us who work with them daily know that the younger generation, despite being derided for being “snowflakes”, often face with grace and good humour challenges that would floor older people. This will be true in this crisis, too.