Teens are being actively encouraged to spend hours a day on screens. How do we keep a balance? 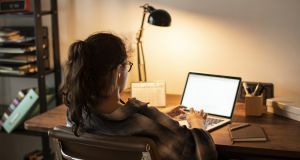 Remote learning is now demanding that teenagers spend many hours in front of screens. Photograph: iStock

Among the many ironies of this pandemic is the fact that most of the time, we try to keep teenagers off their screens. Remote learning is now demanding that they spend many hours in front of them.

Not only that but parents of younger children, particularly parents who are trying to work from home, are probably resorting to more screen time for their children, simply to get something done.

Dr Delaney Ruston, an often-quoted US guru on young people and screen time, has words of comfort during the pandemic. Do not be hard on yourself if there is more screen time than you would like.

Not all screen time is bad. Anything that demands productive or creative interaction is actively beneficial

Dr Ruston is a Stanford-trained general practitioner in Seattle and a parent of a teenager and a young adult. She is also an award-winning filmmaker who has spent the last six years intensely researching the impact of screen time on young people and trying to help people find screen time balance.

From that research emerged two documentaries, Screenagers, and Screenagers: Next Chapter. She also writes a weekly newsletter with advice for parents called Tech Talk Tuesdays. Obviously, not all screen time is bad. Anything that demands productive or creative interaction is actively beneficial. In fact, some parents now wish their children had more connectivity to the internet in order to access online learning. Some homes are sharing devices between newly working-from-home parents and supposed-to-be-studying students. Their problem is not too much screen time but how to ensure access to screens.

Remote learning is a challenge for everyone involved, including this teacher.

Second-level teachers joke about the fact that school is a beautiful place in the first days of June, in that lull between the end of term and the start of the State exams: peaceful, calm and empty.

However, it is just a joke. Schools at their best are busy, bustling, productive places, fizzing with the energy of young people.

Going from that contained chaos to spending long days staring into a computer screen in my back bedroom is not easy. It is odd to take more than an hour to prepare a 10-minute video and then not having immediate teenage feedback as to whether it worked or not. Joe Higgins famously said that questioning Bertie Ahern was like “playing handball against a haystack ...You hear a dull thud but the ball never comes back to you”.

It is not as bad as that, of course. There are feedback mechanisms but they are delayed. I teach English and one of my favourite things is when students tease out the meanings of great texts, particularly fiction and poetry. Even in a live online class, having 20-30 students interacting on screens is nothing like 20-30 students in a classroom, or at least, I have not yet learnt how to make it close to that experience. Sure, you can have comments scrolling in a sidebar chat but it is not the same.

Then there is the ongoing worry of students who are not engaging with online materials. And those who struggle at school are the ones who seem to be struggling most with remote learning.

Positive habits are very hard to create. I am struck by the fact that I have been diligently washing my hands many, many times a day using HSE guidelines for about a month now and I still have to think about all the steps. It is not second nature.

Yet we expect students to develop routines and study habits in these most abnormal circumstances. The number of social media notifications the average teenager receives daily is huge, leading to continuous, partial fragmented attention. Yet they are expected to focus and be highly concentrated on devices designed to be addictive.

Many of them, particularly in the senior cycle, are very stressed and some are not sleeping. It is no wonder that they want to numb out with their phones, even if they know it is often counter-productive.

One of the attractive things about Ruston is that she is open about the mistakes she made, even though sometimes it is in a somewhat intense, over-sharing, American way. For example, when her daughter Tessa got her first smartphone, her mother drew up a four-page contract as to how it was to be used.

Predictably, it was a disaster. Now, Ruston focuses on what she calls the three Vs – validation, values and vulnerability. Validation means stepping into their shoes and letting tweens and teens know that you understand why they want so much screen time. It means acknowledging that their world is hard to navigate and not jumping in with your solutions. Listen to them.

Values are something for parents not just to model but also to communicate, by letting your children know what healthy strategies you employ yourselves when stressed. Finally, there is vulnerability. Adults are often glued to screens themselves. It is worth acknowledging that as an adult, you struggle with some of the same issues.

Not bad advice, not just for talking to teens and tweens about screens but about how to deal with the Covid-19 crisis as well.