The dividing line is now - do you favour radical or more moderate change? 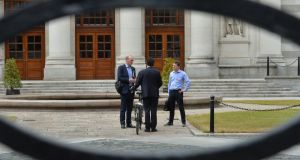 The Greens are not sure whether they are part of the radical side of Irish politics or whether they want to be a special case. Photograph: Alan Betson

Whether the Green Party joins the coalition government with Fine Gael and Fianna Fail or not - and you will know when reading this what I don’t when writing it - the debate within the party in recent weeks has demonstrated the new and defining division of Irish politics.

It is hardly a revelation to note that the civil war division between the two formerly dominant parties has ceased to be the most important cleavage in Irish politics. This was the case even before they agreed to share power 10 weeks ago.

Indeed, it is remarkable that it lasted so long, given firstly the similarity of the two parties’ policy platforms, support bases and governing instincts. And secondly their diminishing combined support over the past two decades, which has fallen first slowly, then rapidly since the last true big-two election of 2007.

This trajectory has mirrored Ireland itself: changing first at a snail’s pace, before suddenly accelerating to light-speed. That Fianna Fail-Fine Gael bifurcation as the central feature of Irish political landscape is a thing of the past; see now the emergence of its replacement.

Irish politics has completely realigned in the past decade. Instead of the civil war, the most important dividing line in politics is now between those who favour radical change in the way our country is organised - socially, economically, politically - and those who favour more moderate, incremental change which would preserve much of the existing status quo.

Your analysis of these questions about our country and its future is unlikely, of course, to be shaped purely by your political philosophy

On one side, the radical side, is Sinn Féin, the Social Democrats (mostly), Solidarity-People Before Profit and the assorted left-wing independents both in national and local politics.

On the other, Fine Gael, Fianna Fail and many of the gene pool and rural independents. Although a party of the left, Labour is by instinct and history in this moderate camp, but that history has taught the party some harsh lessons about the price of power. So for the moment, it is on the radical side.

The Greens are not sure whether they are part of the radical side or whether they want to be a special case - in the manner of many European Green parties, the Germans especially - co-operating with each camp insofar as it promotes and implements green and climate action policies. The clash between these two competing world views is one the reasons why the recent debate has been so divisive in the party.

Some people will see this as just a divide between left and right. But by the usual benchmarks - increasing public investment, prioritising spending over tax cuts, advancing a socially liberal agenda - Fine Gael, with the support of Fianna Fail, has behaved in government in recent years like a social democratic party. So I think moderates versus radicals is a better description.

As with much else in Irish politics, a good signifier for where you stand is the financial crash and the state’s response to it. If you think that the two governments (one led by FF, the other by FG) betrayed its own people by bailing out the banks, accepting the terms of the bailout, implementing austerity policies - irrespective of the subsequent recovery - you are likely to be in the first camp.

If you believe that there was no easy way out and that on balance the governments were probably right not to risk a total economic collapse by defaulting on the debt and crashing out of the euro, then that probably puts you in the second camp.

The governments of a decade ago, consciously or not, decided that a slow, painful and predictable adjustment of the public finances was better than a fast, unpredictable and disruptive one. They chose the moderate path, rather than the radical one.

A question which has a closely related response would be whether you think Ireland is, as some commentators put it, a “failed state”. A corrupt and extremely badly run country, in the words of Eamon Dunphy, “a kip”. Or whether you think it is, while not perfect, a decent democracy and a good place to live.

Your analysis of these questions about our country and its future is unlikely, of course, to be shaped purely by your political philosophy. Your economic status will play a significant role. If you are economically comfortable, and feel you have a stake in society, you are far more likely to believe in the preservation of the status quo, and its gradual reform, than someone who lives in or with the threat of real deprivation, or homelessness, or penury.

That is why it is not just a requirement of good government, but also in the interests of the dominant (for now anyway) moderates to tackle poverty, deprivation and alienation from the state. But they also face a battle of ideas and of narratives.

If the political upper hand rests for now with the moderates - even without the Greens, FF and FG could muster a parliamentary majority - the Dunphian idea of Ireland as a kip, a “failed state”, a place uniquely badly run by self-interested elites to their benefit and the disadvantage of ordinary people, is one that is increasingly dominant on social media and in broader popular and political culture. And, as columnist Janan Ganesh observed during the week, quoting the Trump-enabler Andrew Breitbart, politics is downstream of culture. Put it another way: the momentum is with the radicals.

The challenge for the radicals is to coalesce politically and transform that momentum into a political alliance that can produce a sustainable and cohesive parliamentary majority, translating slogans into a programme for government.

This is what the moderates have, after all, been trying to do for the past three months. Whether we are heading into another election or a term of government versus opposition, the new battle lines of Irish politics have been drawn.