Coronavirus and the rise and rise of the celebrity scientist

Finn McRedmond: Some experts may be reluctant to get off the stage as their influence wanes 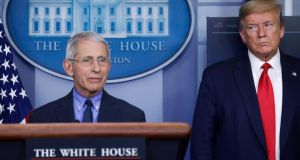 In the US Dr Anthony Fauci has forged his path to fame by acting as a staunch corrective to Donald Trump. Photograph: Reuters

The coronavirus pandemic has seen plenty of unexpected by-products: the digitalisation of the art-world; a new front in the culture war between lockdown-sceptics and lockdown-fanatics; a re-evaluation of the way we work, to name but a few. Perhaps the strangest of all, however, is the emergence of a new type of celebrity.

But this new genre of public figure is a far cry from the swashbuckling Boris Johnson, or the quippy Leo Varadkar – both au fait with the limelight of high public office, both at ease with the trappings of notoriety. Instead, for weeks every night scientists have stood alongside our elected representatives addressing the nation via press conference. And it became science’s turn to take centre stage.

Now the avuncular and demure Tony Holohan, Ireland’s chief medical officer, has become a household name. A mural depicting him as superman sprung up in Dublin city centre. And, an outpouring of tweets declaring fervent admiration for his mannerisms, simple messaging, and calm reassurances have seen him maintain prevalence long into the pandemics grip on the country.

And so too has Holohan’s British counterpart received much the same treatment. The Chris Whitty Appreciation Society has thousands of fans on Facebook. And you can purchase posters, mugs and t-shirts emblazoned with images of his face, if you were so inclined. For an understated and unassuming physician, this is probably a confusing time.

In Greece it is the straight talking and often curt Prof Sotirios Tsiodras who is boasting the regalia of fame.

The New York Times says Spain’s Dr Fernando Simón “has cut an endearing scientific hero figure,” whose diagnosis with the virus prompted “a nationwide outpouring of sympathy and well wishes.”

And beyond official advisers, scientists across the board are being confronted with a tidal wave of media appointments.

Prof Karol Sikora has sky-rocketed to fame, boasting nearly 300,000 followers on Twitter, and now has a daily column in the Express newspaper. Known as the positive professor, thousands have been flocking to him for a dose of optimism amid the crisis.

The wholesale embrace of these scientists thrust in front of the world should perhaps come as a surprise. After years of a culture war rumbling on in the background - one that sought to dismiss expertise as a facet of the elitist metropole - we have seemingly undergone a radical volte face.

There are few among us who wouldn’t be flattered by having murals dedicated to us, or being on the receiving end of public outpourings of respect and admiration

Michael Gove’s infamous adage - that people are “sick of experts” – has had its foundations ripped from under it, as scientists became a source of solace and authority to people coming to terms with the full scale of the pandemic.

Our new champions are not the elected officials navigating the testing political landscape of a world enduring unprecedented upheaval, but rather the quiet scientists and statisticians more commonly found tucked away on university campuses or in laboratories.

And, this newfound celebrity status of course does not come without its complications. It has left this new herd of public-facing scientists exposed to criticism - warranted or not.

In the United States Dr Anthony Fauci, head of the National Institute of Allergy and Infection Diseases has forged his path to fame by acting a staunch corrective to Donald Trump, rebutting the president’s claims on the likelihood of finding a cure, and the timescale to finding a vaccine.

But thanks to this new found space in the public eye, the New York Times reports that the department of health and human services granted a request by the justice department to provide extra security for Fauci following a raft of death threats.

And in the UK Neil Ferguson – a scientific adviser to the government – learned the hard way that you cannot act without impunity once thrust into the spotlight, having to resign after he was caught breaking lockdown rules to meet his married lover.

But now, as the dynamic has shifted, the scientists’ influence is beginning to wane. There are no longer the daily press conferences, the media’s focus is beginning to shift away from its sole focus on coronavirus, and the decisions facing world leaders as they navigate their way out of lockdown are political ones, not scientific ones.

But some may be reluctant to quit the limelight. There are few among us who wouldn’t be flattered by having murals dedicated to us, or being on the receiving end of public outpourings of respect and admiration. In fact, what this episode has revealed to us instead is that scientists are as inclined to enjoy the trappings of fame and public fervour as our politicians.

They are also as prone to infighting and disagreement as your average friendship group – that the scientific advice has differed wildly between certain countries is evidence enough of this. And – as the Ferguson episode alone proves – they too are as prone to bad behaviour and rule-breaking as some of our more morally loose leaders.

Now as prime ministers, presidents and taoiseachs navigate this phase of the pandemic – teasing out the decisions that are political in nature, ones that do not solely require heeding the advice of epidemiologists – we have come to realise a simple fact that has perhaps gone unnoticed: that scientists, like the rest of us, are not immune from a bit of humanity.

1 Coronavirus: Unwinding of latest stage of roadmap ‘could be pushed back further’
2 Mary Hannigan: ‘Bitches Who Stood’ might be better viewed as useful allies
3 UK accuses Russia of election interference and trying to steal Covid-19 vaccine
4 Race against time: The inside story of Ireland’s Covid Tracker app
5 The downing of a minister: How Barry Cowen went from hero to zero in just twelve days
Real news has value SUBSCRIBE