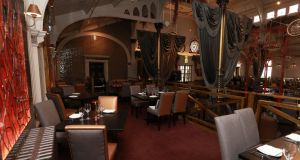 The interior of Fire restaurant on Dawson Street, Dublin, where work on social distancing measures is under way in anticipation of re-opening. Photograph: Laura Hutton

Just a few months ago, Ireland’s restaurant sector was flourishing. Despite high rents and a VAT increase last year, bookings were strong and jobs plentiful. Having avoided the economic hit of a no-deal Brexit, the industry was looking forward to a strong year built around a busy tourist season and insatiable domestic demand. And with a record 21 establishments receiving Michelin stars in the guide’s latest edition, Irish cuisine seemed to be in a golden age.

Just as hospitality stood to gain the most from a booming economy, it found itself badly exposed to the worst effects of the collapse caused by Covid-19. With the exception of those who could offer a limited takeaway service, the lockdown resulted in restaurants having to close their doors and let their staff go overnight. After three long months of shutdown, the country is now tentatively re-opening, but few industries will be less recognisable in the short-term that this one.

With many people still nervous about the virus, few expect demand to return to pre-crisis levels for quite some time

While restaurants may open from next Monday, assuming the Government proceeds with phase three of the reopening, the requirement to allow for a two-metre distance between customers will make many businesses unviable in a sector whose entire model is predicated on filling a room to capacity. For some, even a one-metre rule would be a stretch. And with many people still nervous about the virus, few expect demand to return to pre-crisis levels for quite some time.

The Restaurant Association, a lobby group, says it will take up to two years to return to pre-pandemic business levels and that half of all establishments could be forced to close. It wants the Government to pay for a support package of €1.8 billion, including State assistance to cover rates, water and street furniture charges for two years, a VAT cut and help in paying rent.

A lot of these numbers are guesswork. A great deal is still uncertain, and ultimately the scale of the damage to restaurants, like other businesses, will be determined by the path of Covid-19 and the speed of the race to find a vaccine and effective treatments. But for Ireland’s restaurateurs, even the best-case scenario is unpalatable.