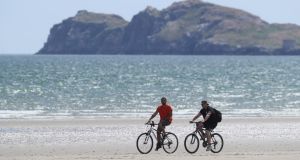 Cyclists on Portmarnock Beach on Friday, as the warm weather continues. Reopening – and restarting economic activity – will involve risk. But so does every other course of action. Photograph: Brian Lawless/PA Wire

There is no avoiding it. We are nosediving into the deepest recession in our history. That will change our politics, perhaps profoundly. Recessions always do.

The last one destroyed the hegemony of Fianna Fáil, previously the most successful political party in western Europe. The aftershocks smashed the duopoly the party had run with its political alter ego, Fine Gael, for the entire history of the State. Even if those two end up in government together in the coming weeks, the system whose essential pillars they were is gone forever. Perhaps the next recession will decide what replaces it.

Two documents published this week gave an idea of the horror show that is now in prospect. The Fiscal Advisory Council and the ESRI both warned of ballooning unemployment, huge deficits, massive accumulations of public debt and painful budgetary adjustments in the future.

I could go on, but you get the picture. The reaction, though, has been curiously muted. Subdued by the social and economic narcotic of the current huge (and necessary) expansion in welfare spending, the wage supports and the debt forbearance from banks (also perhaps the fine weather), politicians reflect the general public insouciance. Ah, it might not be so bad. Sure we can borrow to see us through.

Borrowing comes with terms and conditions; among them is due regard to the wishes of the lenders

Between the publication of the fiscal council’s report on Tuesday and the ESRI shocker on Thursday, the Dáil chuntered into session and party leaders (a numerous tribe in Leinster House these days) questioned the Taoiseach, Leo Varadkar. Green leader Eamon Ryan was among those to look on the bright side.

“We should not be overly fearful or pessimistic for our people,” Ryan told the Dáil. “We have the economic plan. The direction coming from almost all the economists I have seen is that this is manageable and we can do it.”

I am all for optimism at a time like this, but I prefer it to be paired with a glass or two or realism. Anyone remember what happened during the last recession?

Hundreds of thousands of people were unemployed. Thousands of businesses closed. People lost their life savings. Property prices plummeted, shrinking household wealth, but housing did not become much more affordable for many people because their incomes were monstered. Pay cuts extended across much of the economy. (On this point, if public servants still think they are getting a pay increase in the autumn, I urge them not to factor this into their household budgeting.) The lives of an awful lot of people were adversely affected, some of them disastrously so. I don’t wish to ruin your bank holiday weekend brunch, but this is what a severe recession looks like. Not all of it is inevitable, but some of it is.

The pressures on the public finances, from declining tax revenues on one side and the costs of the crisis on the other, will be immense, and bearable only because of huge borrowing. But borrowing comes with terms and conditions; among them is due regard to the wishes of the lenders. And whether those lenders are the bond markets (the Government’s preference) or the EU options that are currently struggling to be born, nobody is going to make loans so that our society can pretend none of this stuff has happened.

You wouldn’t have to be the sharpest political analyst in the world to figure out that this has the potential to turn our politics upside-down. If the next government manages the adjustments cleverly, fairly, with purpose and honesty (though every one of those will be contested territory), if it practices good government against all the odds, its constituent parts can prosper politically. If not, opposition parties – especially Sinn Féin, assuming it leads it – will be presented with an unparalleled opportunity to crush the old firm of Fianna Fáil and Fine Gael and utterly remake the Irish politics landscape. Either way, our politics will be transformed.

There is a fear throughout all levels of Fine Gael that the party could deliver good government and still end up being massacred. They are right that such is a possibility. But I am not sure that changes much; the party still has an obligation to provide the best government it can. Too late to back out now. Anyway, as Cicero – a bit of a Fine Gaeler, Fine Gaelers would like to think – observed, virtue is its own reward.

The new government will not have start with a range of cuts and tax increases; that will come later

The dual task of the next administration – to deliver good government and survive politically – is Herculean, but not Sisyphean. There is one very important difference between the last recession and this one. The structure of the plan to revive the economy will be inverted from the austerity-first model of the last recession. Then, at the behest of the lenders of last resort, the public finances were slashed into shape before recovery; this time, the idea is that recovery should come first, and then the public finances must be brought into order. It means that the new government will not have start with a range of cuts and tax increases; that will come later, but not immediately. It does not mean that the recession will be painless; that idea is not grounded in reality. But it does mean it could be politically survivable. Much hinges on the pace of the return to economic growth.

That is another reason why the country needs to be reopened as quickly as is sensible. This will be among the first decisions of the new government. It will make few more important ones. Reopening – and restarting economic activity – will involve risk. But so does every other course of action. If economic activity doesn’t restart sooner rather than later, we might not have much of a country to reopen.