Question of the Week: Should Irish emigrants have the right to vote? Ciara Kenny, Generation Emigration editor gives her view. What do you think? Have your say below. 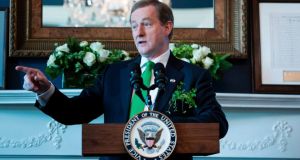 Nothing illustrates the absurd and tortured way we do electoral reform in this country like Enda Kenny’s purported announcement last weekend that emigrants are going to be given a vote in future presidential elections.

I describe it as a purported announcement because it actually amounts to nothing. It was a piece of St Patrick Day’s political bunting which the Government decided to hang out for the diaspora to decorate this week-long international celebration of Irishness.

If you think I am being too cynical in reaching that conclusion then consider the following. It is now 1,265 days since the Convention on the Constitution voted three-to-one to recommend that Irish citizens living outside the State, including those in Northern Ireland, have the right to vote in presidential elections.

Over the course of those 1,265 days the Government has seldom spoken about this recommendation and, on the few occasions when it had to do so on the Dáil record, it has always said almost exactly the same thing.

When it responded in June 2014, the Government merely said it would consider and examine the matter. On more than a dozen occasions from late 2014 to 2015 when Government Ministers were asked, in written or oral questions in the Dáil or in the Seanad, how their consideration and examination was going their response was the following 200-word answer: “The Government considered the convention report in February 2015 and decided that it would be necessary to analyse the full range of legal, practical and policy issues arising before any decision could be made on the holding of a referendum on the matter. The estimated costs arising would also need to be fully analysed and considered. The Government asked the then Minister for the Environment, Community and Local Government, in co-operation with the Minister for Foreign Affairs and Trade and the Minister of State with responsibility for diaspora affairs, to analyse these issues and to report back to the Government in due course.”

I kid you not. This was the precise reply given each time the question was asked. “In due course” lasted right through 2015 and all through 2016.

The Fine Gael manifesto for last year’s election pledged to “fully explore the matter of voting rights for Irish citizens resident outside the State, with a view to holding a referendum”. When asked about the issue in an interview with Ciara Kenny in The Irish Times last year, the newly appointed Minister of State for the Diaspora Joe McHugh said: “A lot of work needs to be done around the practicalities, before we even consider what might be considered in a referendum on the issue.”

Last November Enda Kenny told the Dáil that he had asked that “research being conducted by an interdepartmental group would be concluded soon”.

In the same month Sinn Féin proposed a motion in the Seanad calling for the convention’s recommendation to be implemented, the Government attached an amendment saying that it would continue to consider the matter. As Fianna Fáil senator Mark Daly put it in that debate “It has taken the Government three years to just consider it. Has nobody found the shelf on which the report has rested?” In reply, Minister of State Damien English, with a straight face, reassured senators that the matter hadn’t been long-fingered.

Lo and behold, just 60 days ago in a written reply to a Dáil question, from deputy John Lahart, Minister for Communities and Local Government Simon Coveney, who is now responsible for electoral reform, gave word for word the same answer about analysing “the full range of legal, practical and policy issues arising” that was given to deputies and Senators for the last two years, as I quoted above.

Votes for emigrants isn’t going to happen any day soon. At 1,265 days and counting, don’t hold your breath

It seems, however, that with a tour of US cities on the calendar the Taoiseach or his speechwriters felt the need to include an attention-grabbing announcement about emigrant votes. The same lines have no doubt been included in speeches Ministers and ambassadors will be delivering at hundreds of diaspora events all over the world this week. It will make for an interesting conversation piece over the green beers but it has little real substance. Much of the media at home also fell for the spin treating Kenny’s remarks as some kind of grand announcement of specific plans.

It was nothing of the sort. The Government still hasn’t completed its “examination and analysis” on the issue. When pressed for particulars about what is proposed in terms of votes for emigrants the Government could only say that an “options paper” on how and which emigrants would get to vote and how recently they would have to have lived in Ireland to qualify will be published sometime soon. Coveney said a few months ago that this options papers would be published last January.

Votes for emigrants isn’t going to happen any day soon. At 1,265 days and counting, don’t hold your breath.

1 Coronavirus: Non-essential travel from US set to be banned within days
2 ‘Our hearts are broken’ – implications of fresh lockdown sink in
3 Are we really facing the death of the office?
4 Portlaoise locked down: ‘Our older clientele haven’t been back’
5 Coronavirus: No additional deaths in State but 68 new cases
Real news has value SUBSCRIBE