Adams may have found key to North-South appeal

Unionism has provoked nationalism into a thrilling tribal slap-down 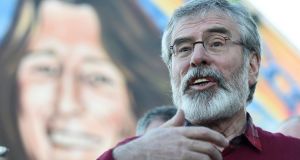 To what extent are events in the North responsible for Sinn Féin’s surge in the South?

A new Behaviour & Attitudes/Sunday Times poll puts the party up four points to a record 23 per cent. Other surveys confirm this result.

Interviews for the latest poll were conducted over an eight-day period up to March 8th, covering the week of the Stormont election and its aftermath.

Ian McShane, director of Behaviour & Attitudes, suggests “images of a newly energised Sinn Féin” have had an effect south of the Border.

If so, there must be more to that energy than mere exposure, or the sight of success begetting success. Reports from Northern Ireland rarely have any effect on a southern audience, beyond making people switch off or turn the page.

Many republicans seem to believe that all-Ireland political reporting is blocked by treacherous West Brits in the Dublin media. Nothing could be farther from the truth.

In 15 years of working for broadcasters and publishers in the enemy capital, I have only ever encountered enthusiasm – bordering on desperation – to interest southerners in the North.

You can be confident this is a sincere editorial priority because it is backed by the financial imperative of accessing two markets for the price of one. The partitionist duplication Gerry Adams keeps complaining about does not just mean sacking public sector workers.

Yet all efforts so far at 32-county journalism have come to little, because southern viewers and readers find it entirely uninteresting or even actively off-putting. A Dublin colleague once advised me never to put “Northern Ireland” in an opening line, or that would be as far as most people got.

But chances are they will not be aware of the welfare reform crisis that deadlocked Stormont from 2012 until the end of 2015, although that was entirely due to Sinn Féin’s concern about how cutting benefits in the North might look in the South.

Throughout this protracted calamity, which brought devolution to the verge of collapse, everyone in Northern Ireland understood its all-Ireland dimension. The rights and wrongs of Sinn Féin’s position were debated in detail across the political spectrum – in fact, this was how the crisis was announced. Former DUP leader Peter Robinson first revealed the problem by ascribing it to Adams’s interests in the Dáil.

Sinn Féin’s focus was believed to be the 2016 Irish general election, with its centenary symbolism – and that date heaved ever more prominently into view through three rounds of all-party Stormont talks.

Did the Irish electorate acknowledge all this brinkmanship in their name? As far as I could tell not one Mexican waved, while Sinn Féin’s southern vote either side of the crisis increased by just 0.1 per cent.

Adams’s agenda on welfare reform may have been financially irresponsible but in political terms it was relatively benign. He was trying to harmonise cross-Border positions on a social policy, while seeing off a left-wing challenge with its own all-Ireland element, in the shape of People Before Profit.

Most unionists were frustrated by the impact on Stormont but realised it was collateral damage in a larger, non-sectarian argument.

In the event, economic recovery in the Republic rendered this positioning redundant. The anti-austerity era of independents and hard-left parties in the Dáil already seems as quaint as a student escapade. Long before this all-Ireland politics failed, it must have been painfully obvious to Sinn Féin that it was not working.

Unionism has provoked nationalism into a thrilling tribal slap-down. Adams, who has never been as prominent at Stormont as he is now, is pursuing a strategy of confronting traditional foes – ordering the DUP to change its leader, ordering the British government to change its “approach”, denouncing the secretary of state as “unacceptable”.

Issues such as social policy have not just been sidelined but defiantly thrown out of the window, with Sinn Féin cheered on by its Northern supporters for closing government down.

If this also plays well in the South, why would Adams ever stop? It could make him Tánaiste in less time than he could drag out another round of Stormont talks – and what a transformation has already occurred in his personal fortunes.

Three months ago, even Sinn Féin TDs were clearly contemplating his departure over the Austin Stack murder.

Welfare reform tested a better type of cross-Border politics to destruction, but still proved that nobody in the Republic cares when Northern politics is paralysed for years.

If the South likes the sight of Adams sticking it to the Brits and the Prods, we are going to be seeing a lot more of it.

1 Covid-19: ‘Green list’ may shorten as Cabinet looks to tighten travel restrictions
2 Why are there so many angry dads?
3 Is that concealer you’re wearing, Mr President? The rise of men’s makeup
4 David Trimble: After the big dinner in Oslo, somebody said why don’t we party together?
5 Maureen Dowd: The US president and the damage done
Real news has value SUBSCRIBE