Noel Whelan: We are about to have another caretaker government 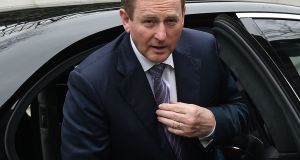 ‘Enda Kenny will be clinging to office for another eight or 10 weeks but will have no power.’ Photograph: John Thys/AFP/Getty Images

The timing and manner of Enda Kenny’s stepping down and the question of who is to succeed him is not merely an internal Fine Gael matter. It will give rise to our first change of taoiseach in six years. Whoever succeeds Kenny as taoiseach will be only the 14th holder of the office, or its equivalent, since the foundation of the State.

In our increasingly presidential style of politics, the choice Fine Gael makes will impact not only on the future of the party and the current Government but also on the timing of the next election and even on the future shape of our party system. The narrative about leadership changes often focuses on whether or not the incumbent is to be given the space to jump or has to be pushed. More often than not, however, the ground merely gives way underneath them. Enda Kenny has been on a thin ledge since last year’s election; the ground collapsed under him during the course of Dáil debates on the Maurice McCabe controversy two weeks ago.

This week Kenny set out a timetable which suggests we will see him stay in office probably until early May. Having been at the centre of a series of wonderful St Patrick’s Day celebrations at the White House during the Obama presidency, it cannot matter too much to Kenny that he gets to present a bowl of Shamrock next month to President Trump.

It is more likely that a need to suggest that the timing of his departure is of his own choosing rather than being forced upon him is the real reason why he is holding on a little longer.

Unfortunately, the delay will serve to make our already weak politics even more vulnerable. Kenny will be clinging to office for another eight or 10 weeks but will have no power. Since this minority Government came into being last May it has been low energy. Before that, for two months last spring, Kenny and his Ministers were merely in a caretaker capacity. It is surreal that this spring again, for the next two months we will have what is effectively another caretaker government. Fine Gael ministers will not be focused on their jobs. They will be absorbed by the machinations of the leadership race.

Not only is the Taoiseach himself now a lame duck, but all Fine Gael ministers will be running their departments only on a care and maintenance basis, knowing that they are likely to be reshuffled by Kenny’s successor and some of them are likely to be shuffled out. Another spell of even weaker government seems a high price for the country to pay just so that Kenny can beat some Fine Gael milestones, such as outlasting John A Costello in office. This may be of interest to historians but matters nothing to voters.

Whenever we have a new Fine Gael taoiseach there will be a very short window in which he or she will have to demonstrate real authority over the Cabinet. If they don’t, then we will have an election shortly thereafter. The next nine weeks won’t be entirely wasted if it provides an opportunity for Fine Gael to conduct a meaningful exploration of the policy outlook, temperament and leadership skills of the contenders to be our next taoiseach.

It would be regrettable if the period merely allowed for more of the tabloid- type coverage that even some supposedly serious media have engaged in about the Fine Gael leadership contest over the past week. Independent newspapers in particular seem determined to make relationship status an issue in this race. I have followed media coverage of Simon Coveney as closely as many political commentators over the past 16 years but I don’t think I have ever seen a picture of him with his wife or members of his family before the Independent decided to run one on its front or second page each day last Sunday, Monday and Tuesday. These photos of Coveney were always juxtaposed beside one of Leo Varadkar on his own.

Independent newspapers have also run tittle-tattle stories about Varadkar’s own relationship and a series of columns devoted, at least in part, to suggesting that it matters who our taoiseach’s spouse would be. It echoes the suggestion touted by Bertie Ahern’s opponents in the early 1990s that the “people needed to know where their taoiseach sleeps at night”. It was insidious then. One would have thought that 25 years later we would have moved on from such nonsense.

It is particularly strange that a newspaper would be doing this, whether for reasons of adding clickbait or colour to coverage of the leadership contest or due to other motives. We should judge our next taoiseach on his or her own ability to do the job and to exercise real authority and deliver stability to our politics. The sooner the changeover happens the better.