The English were prepared to vote in a way that would disrupt the union, so it’s no surprise that the UK is at risk 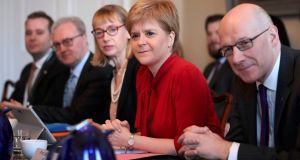 Theresa May’s nemesis is not Jeremy Corbyn, the ghost leader of the opposition, but Nicola Sturgeon. Witness the vitriol poured on Sturgeon’s head for wanting another referendum on independence for Scotland. She has been called a traitor and a wrecker . We have been told that it can’t possibly have been her idea, it must have been a man’s (Alex Salmond) . We have been told that there is no appetite for this in Scotland. May, who sees charm as a form of weakness, used her favoured register – condescension – to inform Sturgeon that “politics is not a game” .

There was a sharp intake of breath at this point. For, of course, Brexit has shown that so much of politics is a game of bending rules simply to stay in power: from David Cameron’s calling of the referendum to May’s desiccated conversion to the cause. The wrecking of the union may be but a byproduct of their recklessness.

Some say they find it unbelievable that the Tories could preside over this mess. I don’t, because much of what was to signal Brexit was set in play by the first Scottish referendum.

Scotland did not vote for independence, but it embodied an idea of what independence may be about, what an engaged populace may look like, what a civic identity could be. I take it for granted that self-determination is a progressive value, so have always supported it. At the time, I wished that we in England could have a similar conversation about who we are, how we distribute our wealth, our position as a small country in the world, our voting system.

No one disputes the heartache and division that erupted during the Scottish referendum process. But no one disputes either the level of political engagement. Westminster did nothing until two weeks before the vote, rushing up in a colonial spasm to get Scotland to stay in a United Kingdom that means absolute domination by England. And by London in particular. This was taken for granted, and still is, by the English polity. But while Scotland was asking itself if it could function on its own as a mature democracy, England was asking itself similar questions seemingly under the radar, seemingly inchoate.

It has been hard to talk about Englishness except through the prism of Scottish independence or through extreme rightwing, racist groups such as the EDL. Englishness then becomes entirely negative and not worth owning. But it doesn’t go away. The result is that we wake up on the morning of the Brexit vote with half the population saying they don’t recognise the country they live in. I hear this said all the time. There is no question that the Brexit vote is an expression of an English nationalism that many have regarded as a kind of embarrassment, as an identity in decline. This identity is English, not British, because it cares not what happens to Scotland – indeed, there is open hostility to Scotland now. It also appears to have no knowledge or care of Wales or, especially, Northern Ireland. The news that there will be a border there to be policed is a trifle to many . This England may be small, but it sees itself as exceptional, as both neglected and swashbuckling.

These feelings have been swilling around for years and were mopped up by Ukip and others on the right. Most of the left sees them as entirely retrograde; nationalism brings up questions about ethnicity and is best avoided. Isn’t it better to have bigger identities? British, European, global? To talk of England in all its complexity has been to veer into the territory of racists. To not talk of it has meant we have ended up where we are now, in the grip of a delusion of English exceptionalism, a turbo-charged nationalism loose from any moorings.

There is almost no purchase on this from progressives beyond telling Brexiters that their feelings are the wrong feelings. Parts of the left have tried over the years to talk of a sense of Englishness, or of belonging, or of a civic identity, or of what a post-imperial country may be, or how Englishness has changed. The talk has been sneered at because patriotism is déclassé, and to enter this territory is “rightwing”. Thus the right has come to absolutely own it.

It is as though we can only see ourselves through others. Many remainers reluctantly admit they can, because of Brexit, now see the case for Scottish independence. In the end, it is for the Scots to decide. Screaming that they are traitors is ridiculous.

In the despair over Brexit, there is a chance to ask what this nation is and what it can be. As the English were prepared to vote in a way that would disrupt the union, there can be no surprise that the union is at risk. This was a vote for English independence at the price of English dominance. Repressing feelings does not make them go away. England was not asked about independence but, in its own irrational way, that is what it was voting for. Why would we begrudge anyone else to do the same?

1 Coronavirus: Non-essential travel from US set to be banned within days
2 Covid-19 incidence in the Republic set to surpass that of UK
3 ‘Our hearts are broken’ – implications of fresh lockdown sink in
4 German nudist chases wild boar that stole laptop at Berlin lake
5 As Irish economy reawakens, we find Sleeping Beauty has a hangover
Real news has value SUBSCRIBE