Nationalists have learned little over the last 100 years 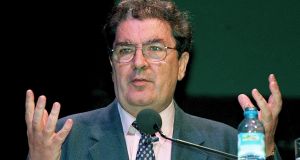 John Hume: spent his political life trying to convince everybody that territorial unity is not what matters but unity between people

The emerging campaign for a united Ireland, led by Sinn Féin and tamely followed by Fine Gael and Fianna Fáil, indicates that Irish nationalism has learned nothing from the events of the past 100 years.

If history tells us anything it is that the one way to ensure a united Ireland does not come reality is for a pan-nationalist front to demand its implementation.

John Redmond’s campaign for Home Rule foundered at the final hurdle because he underestimated the depth of Ulster unionist resistance until too late in the day. His belated attempt to accommodate it destroyed his authority over nationalist Ireland.

Irish republicans went one better and refused to recognise that Ulster unionism posed any kind of obstacle to an Irish Republic. That blindness made partition inevitable and copper-fastened it for a century

A fascinating seminar on the Mansion House last weekend, organised by the Collins Griffith Society, heard from historians how Redmond’s Irish Party was dealt a fatal blow at the South Longford byelection of 1917 for even considering a temporary form of partition.

The irony is that the Sinn Féin victors in that byelection, who denounced Redmond for his moderation, effectively ensured that partition would become a reality with the hardest of hard Borders between the two parts of the island.

In the intervening century nationalism has regrouped at regular intervals to campaign for a united Ireland and on each occasion has only succeeded in reinforcing the strength of unionist opposition to it.

A depressing aspect of successive nationalist campaigns down the years is that they have usually had more to do with internal party competition in the Republic than any genuine attempt to address the complex issues involved.

The issue is back on the agenda thanks to Brexit although Sinn Féin was already agitating for a united Ireland even before last summer’s referendum in the United Kingdom.

Scottish independence is back on the agenda thanks to Theresa May’s handling of the Brexit process. The future of Northern Ireland was bound to come up for discussion given that a majority of people in the region, like their Scottish counterparts, voted to remain in the European Union.

On a practical level there are two massive problems. One is the €10 billion a year subsidy from the British exchequer to Northern Ireland and how that is going to be replaced without wrecking the economy of the entire island.

The second and even more serious problem is that, even if at some point there is a majority in the North for unity, there would still be resistance and possibly violent resistance from a significant loyalist minority. The prospect of loyalist terrorism against an Irish State struggling with the massive economic shock of unity is a terrifying prospect.

While it is possible that, in time, a significant segment of Ulster unionism might reassess its traditional loyalties, in the light of the indifference with which the British government has for its welfare, pushing for a united Ireland will only delay that day.

John Hume spent his political life trying to convince everybody that territorial unity is not what matters but unity between people. The Belfast Agreement was designed around Hume’s vision of creating a society in which both unionist and nationalist traditions could live together in harmony.

That agreement has succeeded in bringing peace to the island but sadly the harmony between the two communities in the North that powersharing was designed to foster has been slow to emerge over the past 20 years.

The result of the recent Stormont election showed some thawing between moderate voters from the SDLP and the UUP but the DUP and Sinn Féin remain as the powerful big parties on either side of the sectarian divide.

The chances of some accommodation between them will be hindered rather than helped by the campaign for a united Ireland even though the only feasible route to unity is for the two communities in the North to find a way of working together as a first step.

The only united Ireland worth having is one that comes about because the people of the North want it. Down the line it is very possible that Brexit and the possible break-up of the UK could lead to a fundamental reassessment by both communities in the North about where their future interests lie.

The Government and the other parties in the Dáil should stop playing games about which of them has the best nationalist credentials and instead focus on overcoming the real challenges of Brexit so that in time this State will be a place that both communities in the North will want to join.

1 Anne Doyle: ‘Depression? I know what it is, and it’s a b*tch’
2 Inside Meghan and Harry’s broken relationship with the royal family
3 ‘It was pitch black’ - Rescued teenager describes night afloat with her cousin in Galway Bay
4 36 hours on Northern Ireland’s Causeway Coast: ‘Everyone is having a wild time’
5 Inside the O’Brien Fine Foods factory in lockdown Kildare
Real news has value SUBSCRIBE