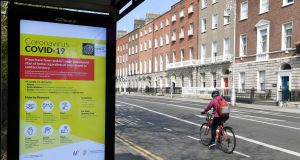 A cyclist passes by a bus stop with a public health warning on Covid-19 in Dublin. Photograph: Aidan Crawley/EPA

There is now strong evidence of two Covid-19 death rates on the island of Ireland. Far from being one epidemiological unit, public-health policies for fighting the disease either side of the Border have produced different results.

Not so long ago, the idea of the island of Ireland as a single epidemiological zone belonged to Brexit protocols over cattle, sheep and fresh food. But on March 23rd Taoiseach Leo Varadkar extended the idea to Covid-19. Referring to a conversation with British prime minister Boris Johnson the Taoiseach said: “I did bring to his attention the issue of Northern Ireland and the fact that we are one island. In many ways we are one epidemiological unit. I agreed with him that we should try and co-ordinate measures as much as possible – north and south.”

The main differences between the North and the Republic emerged in the first three weeks of March as the British and Irish governments took different approaches to the cancellation of mass gatherings, the closure of schools and universities, and other lockdown measures.

The differences, particularly over school closures, caused political friction in the North but the key policy difference was revealed on March 12th when the British announced the “contain phase” was over and that testing for the Covid-19 infection would henceforth be largely confined to hospital admissions. Contact tracing ceased. Policy became focused almost entirely on managing hospital and intensive care unit capacity.

Meanwhile the Irish Government moved in the opposite direction. From early March testing and contact tracing were expanded through dozens of community-based facilities and by the end of March the Republic was testing at more than twice the British rate. Chief Medical Officer Dr Holohan repeatedly emphasised the priority of saving lives.

The more restrictive British testing policy was applied in Northern Ireland and it became clear that Public Health England was centrally controlling the testing regime as well as the procurement of protective equipment across the UK. Minister of health Robin Swann had already announced that people in the North would be brought into the NHS111 helpline system from the end of February.

A memorandum of understanding between the departments of health, north and south, was eventually agreed on April 7th. This is an important statement of principles and commitments to share information and data. The departments have agreed to discuss any changes in social distancing measures, travel restrictions and other control measures. But it also suggests that variable responses to the pandemic either side of the Border reflect “differences in Covid-19 transmission at different stages of the public health response”.

The implication is that the Covid-19 disease arrived first in the Republic and much later in the North, hence the delayed lockdown. Is the island two epidemiological units after all – two zones at different stages in the pandemic?

The first confirmed case of Covid-19 was of a woman who arrived at Dublin Airport and travelled by train to Belfast. The day after this case was confirmed, the Republic reported its first case. So on the basis of known cases, the outbreaks occurred 24 hours apart. The first death in the Republic was on March 11th but not until March 18th in the North by which date there had only been two deaths south of the Border. The crude death rate in the North was 0.6 per million population on March 18th and 0.6 in the Republic the next day. In terms of both the timing of first cases and early deaths it is appropriate to regard the outbreak as occurring at the same time each side of the Border.

The main evidence about the effect of policy variations comes from Covid-19-related deaths. However, the headline statistics announced daily and reported to the World Health Organisation are not always on the same basis across countries. The UK reports hospital-based deaths while Ireland, France and Belgium, for instance, count all deaths from the disease recorded each day, itself an understatement of the Covid-19 deaths that will be registered in due course.

Readily comparable statistics are simply not available across the island of Ireland from the daily headline counts. But it is possible to do two things. The first is to use registered Covid-19 deaths for the North and compare these to the daily surveillance reports in the Republic, bearing in mind that the latter will be incomplete. The disadvantage of this approach is that the data for registrations in the North will be at least a week behind the daily reports, as shown in the graph.

The alternative is to compare hospital-based deaths only, not to conceal the true scale of the pandemic but to provide a reasonably consistent measure. The daily surveillance reports from the Republic’s National Public Health Emergency Team now include the numbers of hospital-based deaths, which are currently 60 per cent of the daily total, a proportion that is falling due to the high numbers of care-home deaths.

The graphs show death rates per million of population for the North and the Republic and also hospital-based deaths. In both examples the Republic’s death rate is two-thirds that in the North.

This is the clearest evidence we have that the different approaches to tackling the Covid-19 outbreak are resulting in different outcomes. This may change as the pandemic progresses but for now it is reasonable to assume that the North’s higher death rates result from lower rates of testing, the lack of contact tracing and the slower application of lockdown measures compared with the Republic. The evidence underlines the case for co-ordinated action across the island to hunt down the virus through high levels of testing and contact tracing and for stronger public-health surveillance at points of entry.
Michael Tomlinson is emeritus professor of social policy at Queen’s University Belfast

Letters to the editor
Covid-19 – one island with very different death rates?
Covid-19: North and South
Covid-19 and the Border