Trump details plan to halt immigration in response to Covid-19 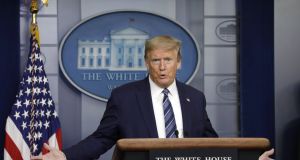 New York governor Andrew Cuomo said he had had a “very good conversation” with Mr Trump during a visit to the White House. Photograph: Yuri Gripas/Abaca Press/Bloomberg

US president Donald Trump has suspended green card applications for 60 days, as he revealed details of his plan to halt immigration in response to the coronavirus crisis.

Mr Trump, who announced on Monday that he was suspending immigration in order to protect American jobs, said that the measure would apply only to those seeking green cards – permanent residency cards that allow non-US citizens to live and work in the United States.

Approximately one million green cards were awarded last year, though half of these were to people already living in the United States.

The scope of the executive order, which the president was expected to sign as early as Wednesday, does not extend to temporary visa applications, amid concerns from businesses that it would ban workers needed for key industries such as agriculture and food processing.

However, the decision to stop green card applications is likely to affect individuals hoping to join family members in the US.

Mr Trump said he would review the order after 60 days.

“By pausing immigration, we’ll help put unemployed Americans first in line for jobs as America reopens,” he said. “It would be wrong and unjust for Americans laid off by the virus to be replaced with new immigrant labor flown in from abroad. We must first take care of the American workers.”

Speaking on Tuesday, White House press secretary Kayleigh McEnany pushed back on reports that the announcement by Mr Trump had been unexpected, prompting officials to draft a legally tight executive order.

“This has been in the works for quite some time,” she said. “We’re putting the final touches on it.”

The announcement by Mr Trump, who put immigration control at the heart of his 2016 election campaign, was denounced by his presidential rival Joe Biden, the presumptive Democratic nominee in November’s presidential election.

“Rather than execute a swift and aggressive effort to ramp up testing, Donald Trump is tweeting incendiary rhetoric about immigrants in the hopes that he can distract everyone from the core truth: he’s moved too slowly to contain this virus, and we are all paying the price for it,” Mr Biden said.

In a separate development, New York governor Andrew Cuomo said he had had a “very good conversation” with Mr Trump during a visit to the White House on Tuesday, with the two leaders discussing ways to increase coronavirus testing.

New York reported 474 new deaths on Wednesday, bringing total deaths from Covid-19 in the state to over 15,300. But New York City mayor Bill DeBlasio prompted some controversy when he suggested that Macy’s annual July 4th firework display would take place as planned this year. Like many department stores across the United States, Macy’s has furloughed thousands of workers.

In Washington, the House of Representatives will vote on Thursday on a new financial package primary focused on small businesses that was passed by the Senate on Tuesday.

The $484 billion (€447 billion) package included $310 billion for the paycheck protection programme – a loan scheme for small businesses that ran out of money last week – in addition to new funds for testing and for hospitals that had been demanded by Democrats.

If passed, the measure will go to Mr Trump for signing. The fresh package brings to $2.7 trillion the amount of federal aid granted by Congress and the president to fight the coronavirus outbreak, which has left 22 million Americans without work.

While the House of Representatives is still in session, its leadership is currently in discussion about changing congressional rules to allow proxy voting – the first time in the body’s history such a method would be permitted. But Senate majority leader Mitch McConnell has indicated his resistance to such a change in the upper chamber, which broke for recess on Tuesday until May 4th.