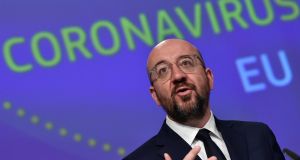 President of the European Council Charles Michel. Sources say Mr Michel will issue a declaration of progress at the end of the conference instead of a joint statement. Photograph: John Thys/EPA

European Union leaders may struggle to bridge deep splits over how to finance a recovery fund to fight a drastic economic slump caused by the coronavirus pandemic as they gather over video conference today.

National leaders are divided over the fund and how to pay for it, as well as over the EU’s seven-year budget, which they had failed to reach a deal on before the pandemic hit.

Sources said the leaders would not even try to agree to a joint statement, and that instead European Council president Charles Michel would issue a declaration of progress at the end of the conference instead. This avoids the need to forge agreement between the 27 member states, and means future talks will be required to reach a deal.

“There will not be a statement like we had last time,” an official said.

Ahead of the summit, national leaders promoted a range of different plans to meet the challenge of the pandemic, amid warnings that the future of the EU hung in the balance.

“I find it essential that the European Council tomorrow would come up with a convincing package in order to mitigate the economic effects of the crisis, especially for the weakest countries,” European Central Bank policymaker Olli Rehn told a news conference. “The future of Europe as a political community is also at stake.”

With agreement looking uncertain, bond markets drove up the risk premium Italy must pay on its debt, despite an ECB commitment to mass bond-buying aimed to keep borrowing costs from overwhelming the euro zone’s weaker and highly indebted economies.

Authorities in Italy, which is Europe’s worst-hit country with a death toll of 25,000, have warned its debt is ballooning and its already-struggling economy may crash by an unprecedented 15 per cent in the first half of the year due to the steep toll of the disease.

Italy has led nine countries in appealing for the issuance of joint debt in response to the pandemic, which would bring down its borrowing costs, and serve as the dramatic step forward it argues is vital to combat deepening domestic disillusionment with the EU.

The idea is strongly opposed by a group of northern states led by the Netherlands, where there is deep public resistance to the idea of sharing debt risks with weaker economies.

At the heart of the division is the same split that has prevented agreement on the EU seven-year budget: between states that want a cheaper EU, and those that demand greater support and a levelling of economic imbalances within the bloc.

Earlier this month finance ministers agreed to a €540 billion package of measures to extend loans where they are needed, but were unable to agree on the most contentious issue of the recovery fund and passed it up for discussion by national leaders.