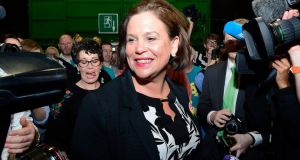 There is a strong implication in the New York Times’s piece that Mary Lou McDonald’s being “5 foot 4” is some kind of policy position, rather than a mere height.   Photograph: Cyril Byrne

The New York Times was in Dublin recently to interview the new Sinn Féin president Mary Lou McDonald. And among other things, its subsequent profile included the following curious comment: “At 5 foot 4, this fast-talking, 49-year-old mother of two is barely a few months into the job and is already being whispered about as the possible first female prime minister of Ireland. ”

Never mind the question of whether people are indeed whispering that. Ignore also the details about her age, motherhood, and speech velocity. What struck me was the opening clause – “At 5 foot 4” – on which everything else appears to hang.

There is a strong implication that her being “5 foot 4” is some kind of policy position, rather than a mere height.

That it’s a platform (or even a pair of platforms) she has adopted deliberately, after careful thought. Also implicit is the notion that it might yet change. She could grow into the job, it hints, and maybe become 5 feet 6 or 8, eventually.

I know height can be important in politics, at least for men.

The State’s founding fathers including a “Big Fellow” and a “Long Fellow” after all. And I recall a short fellow of more recent vintage whose first instinct, whenever confronted by a tall female journalist asking questions, was to look for somewhere they could both sit down.

As to the suggestion that 5 foot 4 is only Mary Lou’s opening position, if that’s what was meant, we will have to await developments.

Anything’s possible in this brave new Ireland, I suppose.

Of course maybe the NYT journalist didn’t mean that at all. Maybe the 5 foot 4 reference was just a colourful detail that didn’t merit a sentence to itself, and had to be telescoped with several other details, but was given undue prominence until, holding the door open for the other subclauses, as it were, it was mistaken for the doorman.

As such, it could be a first cousin of that other thing you hear and read all the time these days: variously known as the “dangling modifier” or the “hanging participle”. This usually occurs when a writer introduces a qualifying verb before the noun it’s supposed to qualify, but then allows another noun to get in the way.

A classic example in Fowler’s Dictionary, as I’ve mentioned here before, was the journalist Richard Ingrams writing in 1987 about the house he grew up in, and saying this: “Now demolished, I can call it to mind in almost perfect detail”.

Ingrams had not been demolished at the time. Far from it: he’s still live today, and heritage-listed. And yes, as Fowler admits, we know he meant the house. But in his sentence, like a bodyguard taking a bullet for the president, the “I” suffers the full force of the “demolished”.

Another of the dictionary’s examples is a letter to a newspaper in 1993 that began as follows: “While serving in the RAF in North Africa[,] the cockroaches and other creatures[...]”. Again, you could quickly deduce this wasn’t meant to suggest the RAF was recruiting insects.

But even so, as Fowler says of that and similar cases, “they just jar”.

You might think this a concern for pedants only.

You’d be wrong. The aforementioned founding fathers were clearly conscious of the issue. It might even be suggested that avoidance of hanging participles was among the principles on which our Republic was founded.

The 1916 proclamation is fraught with modifiers that, in less careful hands, could have been left dangling. Take the second paragraph, which – after the first has evoked the poetic concept of a feminine Ireland – opens thus: “Having organised her manhood through her secret revolutionary organisation, the Irish Republican Brotherhood...”

This is followed by several more sub-clauses. And in the fog of war, there could easily have been a breakdown in communication between the sentence’s headquarters and its outposts. Luckily, it was written by poets. When the qualified noun arrives, eventually, with nothing else that could have been mistaken for it in between, it’s the impeccably correct “she”.

The same thing happens further down, in the line that begins: “Standing on that fundamental right [...]”.

There, the qualified noun is not “she”, but the less poetic “we”. It is, however, equally correct.

The document goes on to express hope that nobody will dishonour the cause by “cowardice, inhumanity, or rapine”.

Notice the use of the Oxford comma – that was typical too.

They may have been fighting for freedom, mainly. But as the proclamation demonstrates, the rebels were also committed to grammar, syntax, and clarity of meaning.