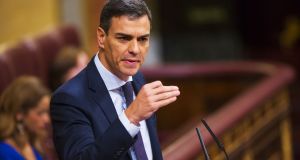 Last Friday, minority prime minister Mariano Rajoy had been ignominiously ousted in a no-confidence vote proposed by the Socialist Party (PSOE) leader, Pedro Sánchez (above), despite the latter’s having only 84 seats in a 350 seat parliament. Photograph: Angel Navarrete/Bloomberg

After a week that suddenly turned the shape of Spanish politics inside out, changes continue at a speed that suggests that we are witnessing the end of an epoch rather than a freak accident in parliamentary arithmetic. What form the new epoch will take, however, remains very hard to discern.

Ten days ago, minority prime minister Mariano Rajoy had secured the support of a clear majority for his budget proposals. Yet by last Friday, he had been ignominiously ousted in a no-confidence vote proposed by Socialist Party (PSOE) leader Pedro Sánchez, despite the latter’s having only 84 seats in a 350 seat parliament. Yesterday Rajoy sent further shock waves through his badly damaged Partido Popular (PP) by resigning as leader, leaving it rudderless in its new role as the major opposition party.

The defenestration of Rajoy and the PP was activated by an unprecedented High Court sentence, which found that corrupt financial practices were systemic in the party. This seismic shock enabled Sánchez to negotiate an unlikely parliamentary alliance, including the radical leftists of Podemos and the pro-independence parties in Catalonia.

It is notable that Sánchez offered neither ministries nor policy commitments for their support, except to confirm that he would honour a budget deal that both underwrote Basque fiscal rights and improved pensions nationwide.

Yet he showed by his language that, in the particularly thorny case of Catalonia, he is moving away from the flag-waving confrontational rhetoric of Rajoy to a recognition that genuine grievances have contributed to the current crisis.

He has already been dismissed by the right-wing media. And he is regarded as a neophyte upstart by his own party’s grandees. Yet his first ministerial appointments yesterday suggest he may be a very skilled political operator, as he must be if his government is not to be the shortest-lived in recent Spanish history.

The naming of Josep Borrell as foreign minister is particularly astute. Borrell is the only senior PSOE veteran to have backed Sánchez as leader; more importantly he is a Catalan who has been sharply critical of the independence movement. His renewed prominence thus calms fears among PSOE voters that the new prime minister is about to make rash concessions on sovereignty.

More significantly still, Borrell is a highly experienced advocate for the European Union. He was a well-regarded president of the European Parliament, and was on the committee that drew up the European constitution. Nothing could indicate more clearly to Spain’s EU partners that Sánchez can be trusted to defend the union’s common interests. It is to be hoped that the Spanish right will now demonstrate real patriotism, and Europeanism, by exercising responsible rather than destructive opposition.