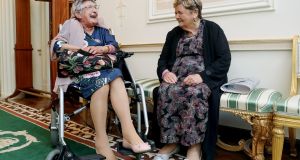 Dolores Cassely, Dublin and Rose Harris, Dublin at Áras an Uachtaráin where President and Sabina Higgins hosted a historic gathering of over 220 women who worked in the Magdalene Laundries. The event took place in support of the work of a voluntary group, Dublin Honours Magdalenes (DHM), which is helping Magdalene Laundry survivors to share experiences and their views on how the Magdalene Laundries should be remembered by future generations. MAXWELLPHOTOGRAPHY.IE

Ramona and her daughter Kateri are visiting Dublin from America this week to celebrate Catherine, a cherished survivor of the Magdalene Laundries. Although not related by blood, Ramona and her husband, Joe, loved Catherine like family. They gave her a home in her hour of need. They nursed her in her final illness. They arranged her memorial and funeral mass. And, in the summer of 2016, they repatriated Catherine’s ashes to her mother’s grave in Ireland where she is finally reunited after decades of separation, suffering and loss. They still mourn her passing. Now, they are here for the “Dublin Honours Magdalenes” event to stand witness to her legacy.

Catherine’s story was told in The Irish Times on the day the McAleese Report was published in February 2013. At 14, Catherine’s father left her at the Good Shepherd Magdalene Laundry in New Ross, Co Wexford. Barely a teenager, she worked for nearly five years cleaning society’s dirty laundry.

She was memorialized her in an article soon after her death in March 2016. Catherine consented to her identity being revealed after her passing when I interviewed her for the Research Council of Ireland/University College Dublin Magdalene Laundries Oral History Project. Her testimony, and those of many other survivors, is now transcribed, preserved for posterity, and available to read on the Justice for Magdalenes Research website.

I will miss Catherine this week - just like ‘Kathleen’, ‘Beth’, Josie, and Martina, to mention but a few of the courageous women who inspired the JFM campaign since 2009. She visited Ireland for the last time in 2014 after receiving her lump-sum compensation from the Restorative Justice Scheme. During that trip, again accompanied by Ramona, she was welcomed at Leinster House by Deputy Maureen O’Sullivan, T.D., who arranged a tour and hosted her for lunch. She was made to feel special. She was an avid reader of history and the occasion was not lost to her as she walked the halls of political power. She would take delight this week in the planned visit to Áras and Uachtaráin, meeting President Higgins, and the banquet dinner hosted by the Lord Mayor in the Mansion House.

And, she would speak up and participate fully in the planned “Listening Exercise,” which fulfills the Scheme’s mandate to consult the women on memorialization. She was a woman of strongly held opinions-political and religious. She was fully engaged in the world. When she moved from Boston to Michigan, and after donating most of her worldly possessions to the local Catholic Charities, she transported forty boxes of books. The Laundries deprived her of a formal education-a ‘loss of opportunity’ she experienced as a stain on her person-but she was self-educated and learned. She knew that what had happened to her in childhood was wrong.

When I first met Catherine she doubted justice would ever come her way-not from the Good Shepherd Sisters and not from the Irish State. She told me, “There’re hoping that in 10 years, we’ll all be under the sod and they can relax.” Those words led to the JFM campaign mantra, that we were going to beat the State at its game of “Deny ‘til they die.”

As it turns out, Catherine lived to witness the apology and Enda Kenny’s words were meaningful to her. She used her lump-sum compensation to purchase a first-class ticket to Ireland (she was living with excruciating back pain at that point); the remainder she set aside to pay for her end-of-life expenses. The short-lived old-age pension changed her life. It transformed her sense of self. For nearly the first time in her life she had a little extra. The delay in sorting Health Care benefits for non-resident survivors meant those entitlements came too late.

I don’t recall Catherine ever uttering a mean, angry or resentful word about our country. She was proud of her heritage and she would have loved the entertainment laid on for the women this week. She returned to the Catholic Church in mid-life and when I knew her she was very religious. And, she was a private person. But her sense of injustice-that Church, State and family had abandoned her to a Magdalene Laundry at fourteen years of age-was deeply engrained. For Catherine, there was no contradiction here. She wanted her story told. She believed it was important to make it available-she left a series of verifying documents accompanying her testimony. She reminded me during one of our phone-calls that, “fresh air is the best disinfectant.”

She understood, moreover, that it is important to know this history, that we as a society come to terms with what we did to poor vulnerable children like her, and ultimately that we must never forget for fear we do the same again. She can no longer speak this truth in person. But as they did so many times during her life, Ramona and Kateri will stand witness to Catherine’s legacy, make her presence felt, and reminisce joyfully about a brave Irish woman who inspired change for the better in our world.

James M Smith is associate professor in the English department at Boston College. He is author of Ireland’s Magdalen Laundries and the Nation’s Architecture of Containment, and a member of JFM Research.