Kathy Sheridan: We need to start acting like grown-ups over Covid-19

From facemasks to distrust of experts, coronavirus has brought out the worst in us 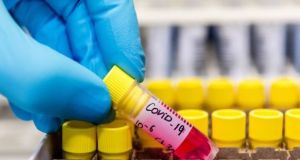 The attempt to conflate a lack of trust in the HSE’s approach with other government trust issues is bewildering. Photograph: Geert Vanden Wijngaert/Bloomberg

Public trust was buried in September 2008, when RTÉ’s Liveline listeners began to panic about their bank deposits. Reports characterised it as a bunch of nervous Nellies prodded into a stampede by Joe Duffy. Duffy said it was about trust. The people had already been primed to doubt everything, mainly by the institutions themselves. Then Brian Lenihan, the minister for finance, lodged a complaint with RTÉ’s director general.

As it turned out, the Liveline reaction was rational. And – since the mighty markets react to swings like a hysterical toddler trapped in a blanket – so, in a different sense, was Lenihan’s.

Masks were the big bone of contention. No one could buy a mask for love or money so there had to be some conspiracy

Last week, as Covid-19 ramped up and people took fright, Duffy did the opposite to prodding a panicky populace.

He advised them to put their trust in the experts and to give their hands a good aul’ scrub with plain old soap and water – and no, he assured them, you wouldn’t get the virus from packages of food that have come from China.

He was up against it. Robbie sounded like he was having a heart attack. Deirdre had a jaundiced view of experts. The Chinese were lying about their statistics, she said. “China is in lockdown,” Patrick interjected. “No matter what we hear from China, Deirdre won’t believe it anyway,” said Duffy.

Deirdre: “I trust my son-in-law, [a doctor], he’s a very intelligent man . . . My daughter works in cabin crew and they want to wear masks but were told it would frighten the passengers.”

Masks were the big bone of contention. No one could buy a mask for love or money so there had to be some conspiracy. “Mr Harris or whatever you call him” should be taking over the mask market. “I bet they have a few hundred [masks] under their bed,” sneered a male voice, “yeah, bet they have them all”.

“The Minister for Health is going to have to come on with their panel of experts and explain to people . . . ,” said Fran.

Joe: “The airwaves are coming down with experts about coronavirus . . . People won’t believe the experts – where do you go from here?” Where indeed.

The most dismaying part was that almost all the callers sounded elderly. Since I’m pretty much in that bracket myself, I am allowed to say this: elderly people used to be more measured than this. There used to be a healthy touch of fatalism about people who had lived a long life. Often it was about accepting the will of God – a fickle premise – but at least it meant there was calm.

And they were practical. Back in the day, many of them felt they had a duty to knock manners into children. This wasn’t about class, control or Miss Manners’ guide to etiquette. As a child, you learned it was the height of ignorance to sneeze or cough with an open mouth without a tissue or a hand to shield others from your snotty spray.

No one wants a view down someone’s tonsils on a crammed bus but more importantly, who wants someone else’s germs?

The irony about the frantic run on masks is that masks are for people who already have the infection. They wear them to protect others. Now there’s something for people who are not infected but still want to wear a mask to consider. They want these masks – which are in short supply – to avoid infecting themselves by touching their own mouths, noses or eyes. It’s rather like fitting a dog with a big plastic cone to prevent him scratching a wound.

Coronavirus is contracted through close contact – that’s within two metres of an infected person. Is it not mind-boggling that we need experts to advise us to cover our mouths, wash our hands and refrain from touching our faces as if it were some bewildering new technology?

The attempt to conflate a lack of trust in the HSE’s approach with other government trust issues is also bewildering. The refusal to give details about a patient’s location beyond the name of the region is not confined to Ireland. Scotland – which like Ireland had just one confirmed case up to yesterday, and therefore a success so far in the view of many – named the patient’s location as Tayside. Tayside has a population of about 400,000.

The argument that people might be reluctant to self-report if the HSE volunteers detailed locations is also glibly dismissed. Yet every one of us knows someone with a suspected “normal” illness who assiduously avoided the doctor for fear of confirming bad news. Treble that for those who fear the Facebook “experts”, the stigma of an infectious disease and/or an ethics-free journalist stalking the neighbourhood. How is that making us any safer?

The notion that the HSE should bend because a parent posts its communications online is not proof that the HSE got it wrong or lost some imaginary battle with Facebook; it proves that the HSE promises confidentiality and is consistent about maintaining that promise. That’s about trust. Without trust we are lost. There is a public responsibility not to undermine it.

“Civilisation is two meals and 24 hours from barbarism,” Duffy said last week, quoting Neil Gaiman who may have been quoting Larry Niven.

It was apt. Our cynicism, sense of entitlement and selfishness are catching up with us fast. Personal responsibility is lagging a long way behind.