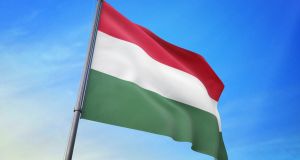 An English republican flag made its first public appearance at the Spa Field Riots of 1816. Photograph: Oleksii Liskonih/iStock

Had history happened differently, there might be more than one tricolour on display when Ireland play England in Twickenham this coming Sunday. But if the horizontal green, white, and red flag never took off on our neighbouring island, it may be partly due to an event that will have taken place in another part of London exactly 200 years ago on that day.

The uncovering of the so-called “Cato Street Conspiracy” thwarted a plan to wipe out the entire British cabinet of the time, including its Dublin-born foreign secretary Lord Castlereagh, widely hated by then on both sides of the Irish Sea.

His might even have been one of the heads that the plotters intended to display on Westminster Bridge afterwards, en route to seizing various strategic buildings and declaring a republic. Alas for them, the dinner all cabinet members were supposed to be attending on February 23rd, 1820, was fictional: invented as a trap by a government spy who had infiltrated the group.  Police and soldiers instead raided the loft in Cato Street where the plotters had assembled. And it was five of the would-be assassins who ended up losing their heads. Thousands attended their executions in May, some paying up to three guineas for a good view.

The leader of the conspiracy, one Arthur Thistlewood, was stoical at the end, speaking from the dock like an English Robert Emmet. “Albion is still in chains of slavery,” he said. “I quit it without regret. I shall be consigned to the grave, and my body will be immured beneath the soil whereon I first drew breath. My only sorrow is that the soil should be a theatre for slaves, for cowards and for despots. My motives will hereafter be justly appreciated.”

Because the plotters were squashed so thoroughly, it is not known how widespread their support had ever been.  But it was an age of unrest in England, as the collapse of agriculture after the Napoleonic Wars, the dire poverty of industrial cities, and the lingering influence of the French and American revolutions all combined to produce a series of uprisings.

Thistlewood had already been among those involved in the Spa Field Riots of 1816, when an English republican flag made its first public appearance. Like the modern Hungarian one, it comprised horizontal bars of green, white, and red: green being considered the colour of the common man.

The years following brought the march of the “Blanketeers” in Manchester, Derbyshire’s “Pentrich Rising”, and – most seriously – the Peterloo Massacre of 1819 when, again in Manchester, cavalry charged a mass public meeting, killing 18 people and injuring hundreds. It was his role in defending such acts of repression that earned the aforementioned Dubliner poetic infamy, via Shelley’s The Masque of Anarchy: “I met with murder on the way –/He had a mask like Castlereagh.”

But there was also a strong and consistent Irish presence among the revolutionaries. Although the ringleaders of Cato Street were English, and although the extent of their organisation is obscure, one modern historian has suggested that “the London-Irish community” was generally sympathetic, along with various trade societies, and pockets of the industrialised north. Events in Ireland 20 years earlier were a continuing influence too, and not just via those who had emigrated from here. For a time in the late 1790s and early 1800s, there had even been a Society of United Englishman, centred in and around Yorkshire and inspired by the Irish model.

The English version didn’t leave as big a mark on history, but some of its ideals and sympathisers resurfaced in 1814 with the Society of Spencean Philanthopists, named in posthumous tribute to Thomas Spence, a Newcastle-born radical, who had died in that year after spending much of his adult life in prison.

Spence advocated overthrow of the aristocracy, public ownership of all land, and universal suffrage for both sexes, among other reforms.  He may also, as far back as 1794, have been the first English person to use the phrase “Rights of Man”.  Indeed, he was ahead of his time in promoting “The Rights of Infants” too, in an essay of that title.

The unfortunate Thistlewood was his ardent disciple.

And one of the reasons the Cato Conspiracy is hard to quantify may be accidentally commemorated by thousands of rugby fans in London this weekend.

As a biography of Spence explains, he had never liked the idea of having a centralised radical body but instead encouraged “the formation of small groups that could meet in local public houses”.