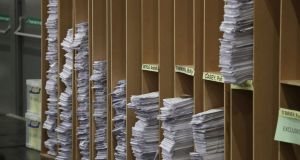 “We know what we have and we value it. Ireland came fifth of 65 democracies worldwide in terms of our contentment with our democracy in a 2019 study.” Photograph: Nick Bradshaw

A minor humiliation for Varadkar became a worse one for some British observers who inferred that he had lost his seat.

Then there was Monday’s hot take from the veteran BBC journalist, John Simpson: “So Ireland, which has been politically stable for decades, has also succumbed to populism now”.

Generally, they set out with the notion that our election was a) shaped by a kneejerk reaction to Brexit or b) inspired by English nationalism. For answer, they only had to glance at the exit polls (one in 100 was bothered about Brexit) or at the rictus smile on Varadkar, awarded nul points for his troubles by his own side though routinely abused by elements of the same English media as some kind of anti-Brit, EU-licking, nationalist leprechaun.

That might be seen as a matter of opinion but they really should know that nationalism in a post-colonial nation is a very different beast to their own kind. And for that we are grateful.

Once again, this election has highlighted the stark contrast between the neighbours. Where they perceive an unholy mess of an election comparable to the binary Brexit omnishambles, we see the glory of a complex democratic exercise to which the great majority of the electorate has made a meaningful contribution.

Where the BBC man accuses us of succumbing to populism, we survey the post-election detritus of some tiny far-right units and pride ourselves on having crushed them.

The normalisation of Sinn Féin, born of voters’ rage and frustration, has occurred in a matter of weeks rather than years

A few loose mouths may have slipped in but they remain where we can see them. Nothing about the line-up of potential leaders suggests that we have succumbed to an Irish version of Hungary’s Viktor Orban or Italy’s Matteo Salvini.

We know what we have and we value it. Around two thirds of Irish people are satisfied with our democracy according to a 2020 study by Cambridge University’s Centre for the Future of Democracy. By contrast only one third of British voters are satisfied with their system, an all time low.

These are no small things for any nation, let alone one that has settled on a modus vivendi with our neighbour, that restless rump of an empire that once colonised us yet still cares to know so little about us, content to imagine that our election was all about them.

In fairness to the BBC man, perhaps what he meant by “populism” was Sinn Féin’s madly popular promises, such as tax breaks for everyone earning under €100,000 and scrapping the property tax while simultaneously building tens of thousands of affordable dwellings and solving the sticky problem of attracting thousands of extra hospital consultants while taxing lumps off their pay. Immediately. It’s a conundrum.

Part of the answer may well lie as suggested with forcing aggressively tax-avoiding behemoths to pay more. And perhaps in this new dawn the sense that contributing towards world-class healthcare, childcare, housing and transport might be framed as a decent moral purpose for all citizens. Or maybe the figures simply don’t add up. We can only wish them well.

But there is nothing simple about this for anyone. This is not Denmark. The normalisation of Sinn Féin, born of voters’ rage and frustration, has occurred in a matter of weeks rather than years. Three-quarters of the electorate did not vote for them. If it’s difficult to imagine a Sinn Féin minister for justice or foreign affairs, we should ask ourselves why.

For anyone driving through the North, many journeys will take them past a succession of placenames synonymous with misery, mass murder and sectarian savagery, some of it carried out in our name.

This week’s attempts to glorify this era or to dismiss it as all in the past like the peace process – though still very much a process, everyone agrees – is like asking people to undergo lobotomies.

This is why any attempt by Sinn Féin to harness its stunning leap to power – achieved on the back of bread-and-butter issues – to rush the country towards a Border poll, will be met with some resistance.

An elected representative can persuade people into a united Ireland or he can roar Up the Ra. He cannot do both, covertly or overtly

The suggestion that the undemocratic tendency is banished is visibly contradicted by the hijacking of the national flag as Sinn Féin party branding and the casual Up the ’Ra sloganeering.

It’s only two years since a then Sinn Féin MP, aged 52, posted a picture of himself with a Kingsmill loaf on his head on the 42nd anniversary of the murders of 10 Protestant workmen near the south Armagh village of Kingsmill.

Some may be inclined to indulge these shenanigans as an edgy identifier with a whiff of cordite – as some of my generation did in our teens and 20s – but many of us have grown up to know that the price of peace is eternal vigilance.

The defensive whataboutery that hit social media on Monday was predictable but contributes nothing to the urgent work of government and a secure peace.

In 2020, the choice is this – an elected representative can persuade people into a united Ireland or he can roar Up the Ra. He cannot do both, covertly or overtly.

While the bread-and-butter issues are being sorted, a decent period of respectful reflection and reassurance would be welcome. That includes all foreign media.

1 ‘I got a burning smell in my nose’: Third-wave Covid-19 patients share their experiences

5 There is no such thing as unhealthy food