Kathy Sheridan: 'Votegate' should not be used for political gain 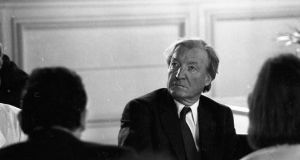 The notion that Fianna Fáil’s dramatic four-point fall in the weekend’s Sunday Business Post/Red C poll is due to outrage at vote abuse in the Dáil chamber is intriguing. Is it possible that as recently as a week ago a slew of voters were all set to plump for Fianna Fáil but suddenly changed their minds out of offended principle?

On radio a Government Deputy aged 53 (ie, he was a grown man when Charles Haughey was still in office) compared some stupidly casual voting practices by certain Dáil members to the worst excesses of the Haughey era.

Quick reminder for anyone needing an insight into the stupidity of current events: activities in the Dáil are now conducted under cameras, with second-by-second screenings available to Twitter users who didn’t even have to look that hard for them last week.

Quick reminder for anyone with wilful amnesia: Haughey’s career lurched from crisis to scandal amid serious, persistent claims of bullying, intimidation, offshore cash and a regally lavish lifestyle financed with millions mysteriously gifted to him as taoiseach by a variety of wealthy businessmen.

“I can be a very troublesome adversary,” he reportedly told one bank to whom he owed a lot of money.

National scandals, current or historical, are not matters to be trivialised as handy fodder in any old controversy

His minister for justice turned the Garda Síochána into a government tool, harnessed to tap the phones of journalists whose reporting was enraging the boss.

Haughey ended up in the beam of two tribunals and only escaped criminal charges due to an allegedly prejudicial comment by the then tánaiste. In top autocrat style, he considered himself answerable to no one, and his loyal followers saw nothing wrong with that.

And here’s another reminder. Harking back to the “excesses” of others is a dangerous political game. Neither of the main parties is free of painful episodes in their history, some of them of more recent vintage.

The key point is that national scandals, current or historical, are not matters to be trivialised as handy fodder in any old controversy. That’s called false equivalence now, and may be more serious than you think.

Remember Hillary Clinton’s emails? In 2016 the mainstream media hammered Clinton day after day about emails, turning it into the single most important issue facing US voters. Meanwhile the same media was deriving lucrative entertainment from the coarse, ignorant, lying monster that was Trump and his mad rallies.

It was the emails “scandal” – in reality a minor misdemeanour – that enabled Trump and his poisonous lieutenants to dub her “crooked Hillary” and lead the “lock-her-up” chants at the rallies.

So you may have missed the following statement issued just last week by the US state department: “A multiyear state department probe of emails that were sent to former secretary of state Hillary Clinton’s private computer server concluded there was no systemic or deliberate mishandling of classified information by department employees, according to a report submitted to Congress this month.”

Yes, we should be able to trust our politicians to press their own buttons, but we cannot trust some of them obviously

This disguises the fact that in recent months dozens of former state employees were subjected to renewed investigation into nine-year-old emails after being notified that some had been retroactively classified. Would you wonder whose hand was behind that renewed vigour?

Or whether many of the media figures who drove the email narrative into a world-changing scandal are examining their consciences?

Truth, memory and alertness to false equivalence are important. Last week’s Dáil events were a warning.

At the heart of the voting controversy was a serious but visible problem. In a serious parliament it would have been dealt with firmly, in minutes, with a resolution to punish the culprits and a means agreed to ensure it could not happen again.

There is no great technological mystery to it. Yes, we should be able to trust our politicians to press their own buttons, but we cannot trust some of them obviously.

And nor can others in different jurisdictions, to be fair. So in the Scottish parliament, for example, each individual desk is equipped with a small computer console into which members must insert their parliament passes before using it to vote. That’s it.

There was a blow-up a few years ago when a vote went “missing” in a tight division, but that’s what the tellers are there for. Otherwise the Holyrood system has worked perfectly well.

Yet hours of Dáil time and reflection time were devoted to finger-pointing and pontificating last week. It was turned into a demented circus, lacking any perspective or proportionality.

And it all happened against a background of an unspeakable, wrenching human catastrophe unfolding very close to us, involving people that may live up the road from us.

People are looking for leaders with gravitas, authority and values that rise above petty vengeance.