The Irish Times view on James Joyce’s remains: leave him be

There is a calculating, even mercantile, aspect to contemporary Ireland’s relationship to its great writers 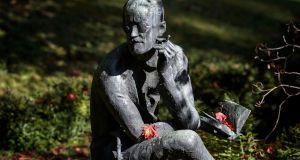 A sculpture depicting James Joyce behind his grave in Fluntern cemetery in Zurich. Photograph: Fabrice Coffrini/AFP via Getty Images

The proposal by two Dublin city councillors that James Joyce’s remains should be repatriated in time for the centenary of the publication of Ulysses in 2022 has not met with an enthusiastic response.

Joyce died in Zurich in 1941 and is buried in the city’s Fluntern cemetery, his funeral was attended by a representative of the British government but not by an Irish one.

Joyce was not alone among famous Irish writers in living – and dying – abroad. Even if, to varying degrees, the country of their birth remained a memory and an influence for Wilde, Shaw, O’Casey and Beckett, as for Joyce, the best place to live and write was somewhere else.

Joyce’s quarrel with Ireland was a particularly bitter one. He felt oppressed by the Catholic church’s power over private lives and intellectual and artistic production, and by the servility of the politicians in facilitating that dominance. The state’s chief concern on hearing of his death was apparently to inquire whether he had returned to the faith on his deathbed; he had not.

It has been suggested that the exile which Joyce quite deliberately chose should not necessarily “follow him into eternity” and that the repatriation of his remains would be a fitting mark of the esteem in which he is now held.

Yet it is hard not to suspect that there is a calculating, even mercantile, aspect to contemporary Ireland’s relationship to its great writers, whom we are often more keen to “celebrate”, and if possible monetise, than read.

We might do greater justice to Joyce’s memory and his convictions by continuing to respect the integrity of his dispute with the country in which he was raised and whose memory stayed with him all his life.

One of his friends, in an appreciation in this newspaper following Joyce’s death in 1941, wrote that he was “worth half a dozen Irish legations” in any country he chose to live in. “In making Dublin famous he made Ireland famous in European letters.”

Perhaps that is enough.