October 11th, 2019: Extinction Rebellion campaigners targeted the Department of Environment in the fifth day of action in Dublin. 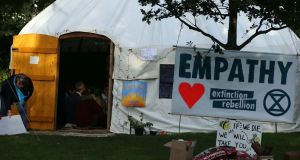 Extinction Rebellion activists were based in Merrion Square in Dublin for the duration of their ‘action week’. Photograph: Stephen Collins/Collins Photos

Last week, the Lord Mayor of Dublin was asked whether he knew in advance that Extinction Rebellion (XR) activists would be camping out in Merrion Square park without a permit. We’re still not sure of his answer.

Either way, Fianna Fáil councillor Paul McAuliffe, the chair of the city’s local government body – to give him his more prosaic republican moniker – had no issue with XR activists deciding to pitch 20 tents, a yurt, some baths and marquees for a few illegal overnights in the park. In fact, he paid a mayoral visit to the encampment and came out of it having agreed, apparently, to declare a climate emergency for Dublin.

He was fine with it all, pretty sure that “a group camped in a park for a few days neither set a precedent nor is it something we should reject”. His key point was that this group was “different” to all the other groups who might want to pitch up in a city park without a permit. He also felt sure somehow that the protest would not be “revisited”.

When elected Lord Mayor in June, McAuliffe cited housing and climate action as his top priorities, promising the council would “again” lead on affordable public housing: “We will do it on our lands and we will do it as the lead developer . . . We will also take a lead on climate action. It was a key issue discussed by voters on the doorsteps.”

Resolute stuff. Fianna Fáil’s long and tortuously winding road to environmental purity was clearly building up steam. And they would also lead “on the issues of illegal dumping, antisocial behaviour and open drug dealing”. Which would all require some serious funding, he didn’t add.

Come September, Fianna Fáil, Fine Gael, Sinn Féin, People Before Profit plus members of the Independent group ignored the city manager’s advice and again voted to reduce the local property tax by 15 per cent, the maximum amount. It means roughly an extra fiver a month in the average home-owners’ pockets – a pittance, as Green councillor Michael Pidgeon pointed out – but thousands for wealthy property owners.

What this all adds up to is €12 million less for the city’s public services when income should be rising. Climate emergency measures do not come cheap. It will be interesting to see what meaningful changes the main parties stitch into the clothes so blatantly stolen from the Greens and how many of them will be stunts.

The targeting of London’s predictably frenzied Canning Town tube at morning rush hour last week was an elementary error, to put it charitably

The Lord Mayor’s decision to follow his nose in the Merrion Square affair was politically sound. But it left Dublin city chief executive Owen Keegan in a bind. Keegan was “extremely unhappy” that the XR activists had been allowed to camp in the park without his knowledge; that they had not sought a permit; and that city council staff had taken a quiet decision to let them stay. Council staff should be “neutral” in such situations, said Keegan. Yet, had he become aware of the illegal encampment, would he have then felt obliged to act and how would that have worked out?

So who was right? Who gets to be the arbiter of any hierarchy of protestors? Yes, climate change is the issue of the age. Extinction Rebellion is a highly successful, brave model of its kind, backed by science with terrifying implications for the planet. But XR is not tactically infallible. The targeting of London’s predictably frenzied Canning Town tube at morning rush hour last week was an elementary error, to put it charitably. To collapse the public transport system and its helpless commuters – whose transport choices were self-evidently helping to save the planet – was stupid.

Still, the incident has led to much reflection, with the gamut of opinion among XR strategists and members running from straight apologies for the stupidity to an unapologetic co-founder’s view that “the public, I don’t think, realise quite how serious this situation is”.

But overall, the sense is that tactical fiascos cannot be casually dismissed as collateral damage; if so, mass support will fade and die as it did with Occupy and other movements. President Michael D Higgins, the de facto conscience of the nation, has shown caution, saying XR must be “very careful about its choice of tactics. I want to stand back and see how XR develops.”

Extinction Rebellion is treading a fine line. Following the Canning Town fallout, it is now said to be drawing up plans to move away from scheduled disruptions and towards building a high-profile platform for experts to shape global debate.

But here’s the question for the Lord Mayor. Next time, say, a 93-year-old woman is kept on a hospital corridor for several agonising days, will he indulge angry protestors who break into Merrion Square park with bullhorns, bedding, banners and tents? Will he indulge the next iteration of water charges protestors eyeing a grassy camp within shouting distance of Government Buildings, to rail against the slew of charges that will inevitably flow from climate emergency measures ?

Who decides which of these groups should be favoured or which should be dragged away?