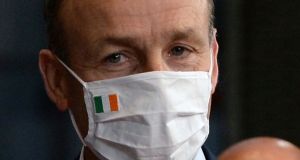 In a glowing review of the latest production of Ireland – now appearing on the world stage for an unlimited run – Tuesday’s Guardian saw fit to paraphrase a poem by WB Yeats.

For once, it was not The Second Coming, although that remains much in demand for describing dysfunctional politics elsewhere, including Britain.

Admiring Ireland’s new hatchet-burying government at home and a string of successes overseas, a Guardian editorial rewrote Yeats’s punchline to read: “An enviable beauty is born”.

It followed last week’s praise by the Economist, which argued that in proportion to size, Ireland could now claim to be “the world’s most diplomatically powerful country”.

With apologies to Yeats, however, the encomiums from overseas sent me re-reading another Irish writer, James Joyce.

Not his books this time, but a piece of mere journalism he wrote early in his career, in 1907, on what he saw as his homeland’s then tragic inability to make itself heard or understood abroad.

For the personification of this condition, he first went back a generation earlier to the fate of his namesake Myles Joyce, a Connemara man hanged for the Maamtrasna murders of 1882, although posthumously cleared of guilt.

Even in 1907, Joyce argued that Ireland was still interpreted to the world almost exclusively by British diplomats and the London press

Myles Joyce spoke no English but was extremely eloquent in Irish, a situation turned into black comedy at his trial by the laconic interpreter. Thus, at one point, the judge asked the accused if he had seen a certain woman on the fatal night.

As James Joyce summarised: “The question was referred to him in Irish, and the old man broke into an involved explanation, gesticulating, appealing to the others accused and to heaven. Then he quieted down, worn out by his effort, and the interpreter turned to the magistrate and said:

‘He says no, your worship.’

The judge then asked if the defendant had been in the neighbourhood that night. When translated, this provoked another long reply:

“The old man again began to talk, to protest, to shout, almost beside himself with the anguish of being unable to understand or to make himself understood, weeping in anger and terror. And the interpreter again, dryly:

“He says no, your worship.”

Bad as the Connemara Joyce’s plight was, the Trieste Joyce (he was newly exiled then) played it up a bit.

While Joyce-the-defendant was no more than middle-aged, Joyce-the-writer makes him 70, better suiting the metaphor.

The essay continued: “The figure of this dumbfounded old man, a remnant of a civilisation not ours, deaf and dumb before his judge, is a symbol of the Irish nation at the bar of public opinion. Like him, she is unable to appeal to the modern conscience of England and other countries.”

Even in 1907, with most of its population English-speaking, Joyce argued that Ireland was still interpreted to the world almost exclusively by British diplomats and the London press.

The former had the ears of everyone, including the pope. The latter rarely covered Ireland, except when there was trouble, at which times it was always portrayed as a lawless, hopelessly violent country, on which England’s civilising influences were wasted.

The truth, Joyce told his Italian readership, was that Ireland in 1907 had less crime than any other country in Europe.

Murder was even rarer, he said: “When one of those events which the Parisian journalists, with atrocious irony call ‘red idylls’ occurs, the whole country is shaken by it.”

I’ll have to take his word for it that the cynical French press used the phrase “red idyll” for murder, mass and otherwise: I can’t find it in any dictionaries, French or English. In both languages, an idyll/idylle means “a picturesque scene”. But I suppose it must have been an early version of the equally cold-blooded: “If it bleeds, it leads.”

In any case, Joyce’s essay (“L’Irlanda alla sbarra” or “Ireland at the bar”) serves as a useful reminder that the winners always get to write the history books.

Not that Joyce was a winner in 1907, no more than Ireland.

Had he not fought his own war of artistic independence a decade later, culminating with the publication of Ulysses in 1922 (a document almost as controversial as the Anglo-Irish Treaty) we probably wouldn’t be reading his obscure early essays today.

As for Ireland’s current status as international flavour of the month – a sort of “green idyll” – no doubt it won’t last.

But with Joyce to remind us where we came from, we should enjoy it while we can.

It may be all the sweeter given one of the ironies of the new situation. Part of the mission presented to us by latter-day history, it seems, is to try and explain England to an unsympathetic world.

1 Ireland among countries urged to consider reinstating Covid-19 restrictions
2 Lowest numbers in two weeks as one more Covid-19 related death and 35 new cases reported
3 ‘I’ve been sleeping with my girlfriend’s sister. I need help. What do I do?’
4 Ward at Naas General Hospital closed due to suspected Covid-19 outbreak
5 Russia set to begin Covid-19 vaccinations within weeks
Real news has value SUBSCRIBE