Lockdown locks down – Frank McNally on the return of male hairdressing 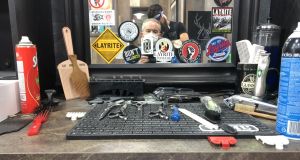 In recent days, many men have been handing themselves in to their local tonsorial correction facilities, with the usual pleas for clemency, eg: “Short but not too short.”

For a while there, coronavirus threatened to revolutionise male hairstyles in a way that hadn’t happened since the hippy years.

Then the barbershops reopened. And in recent days, many men have been handing themselves in to their local tonsorial correction facilities, with the usual pleas for clemency, eg: “Short but not too short.”

For me, there was a slightly furtive feeling about the process. It may be a reflection of the sort of women I know, rather than any norm. But on occasions when I had expressed impatience for the return of the clippers, I heard more than one female acquaintance lament that the male “obsession” with short hair had survived the pandemic, against their hopes.

To visit the barbers again at the first chance anyway, in spite of such disapproval, seemed to carry a faint echo of times when a man might come home from town and break it to his family that, on a whim, he had just joined the army.

But then male hairstyles have long been a political issue in a way that women’s have not. I’m reminded of this every day when I pass the Croppies’ Acre in Dublin, supposed burial place of rebels synonymous with their haircuts, an imitation of the French revolutionaries who were in turn protesting against a long-haired aristocracy.

Those were all republicans, of course. In more recent times, the 1960s onwards, short hair on men became the preserve of the political right, while the lefties let it grow. During the trench wars of the 20th century, shaved heads had become a simple prerequisite of army hygiene. But being a skinhead, in peacetime, meant you were a Nazi.

The Nazis should not be confused with the Nazirites, an ancient biblical people whose men, on the contrary, grew their hair long for religious reasons. Their spiritual descendants today include the Rastafarians of Jamaica, whose dreadlocks still mark them apart from the “baldheads” (people with more conventional hair).

But the most famous Nazirite was Samson, a man some of us first heard about during an era when, even in conservative rural Ireland, men’s hairlines were getting longer again.

Funnily enough, neither Samson’s terrible fate nor the ubiquitous pictures of Jesus looking like a member of Horslips, circa 1978, was considered sufficient excuse by our parents for us to grow our hair long too.

Unfortunately, schools – like armies – also by them tended to prefer it short and might expel male students for breaching the code. Writing in 1995 in the wake of one such controversy, a former columnist in this newspaper, John Waters, described how his own education had perversely converted him to long hair.

Georgie Best and the Beatles aside, his hairdressing influences included a Christian brother, “one mean bastard”, whose visits to the barbers were always followed by upsurges in violence.

As his locks luxuriated, he became progressively pacified. Then there would be another haircut and the return of martial law.

Last Sunday, as I was mulling these and other thoughts, and still wondering whether I should submit imminently to the shears, Tom Robinson on BBC 6 hosted one of his themed radio shows, this time featuring haircut songs. I listened with more than usual interest, even though in many cases the lyrics were less than enlightening.

I had always assumed, for example, that the catchy late-punk classic Take the Skinheads Bowling (1985), was a eulogy to the civilising effect of indoors sports on hair-hating fascists.

But on closer inspection, as the band themselves admitted, it was deliberate attempt to write random lyrics, devoid of meaning.

By contrast, some of the more thoughtful songs, including “Bernice Bobs Her Hair” by the Divine Comedy (inspired by F Scott Fitzgerald’s short story of the same name) involve female hairdressing dilemmas – in that case the tragedy of a woman talked into a disastrous bob by a jealous cousin who knows it won’t suit her.

Similarly, Billy Bragg’s Walk Away Renee is a miniature melodrama about a thwarted romance which ends: “And then one day it happened. She cut her hair and I stopped loving her.”

But more usefully for a man, the last song in Robinson’s programme – “I Almost Cut My Hair”, by Crosby, Stills, Nash, and Young – took the form of a debate on the pros and cons of barbering, in light of the socio-political implications of its time (1970). As the title suggests, the narrator (David Crosby) had come perilously close to surrendering to the clippers: “But I didn’t and I wonder why.” Then he answers the question, in fluent hippy: “I feel like letting my freak flag fly.”

That decided it. I was in the barber’s first thing Monday.