John McManus: Is reopening hairdressers a risk worth taking?

Other European countries have taken a different approach to Ireland 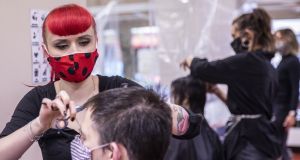 Hairdressers work at a hair salon that opened today for the first time since March during the novel coronavirus (Covid-19) crisis on May 4, 2020 in Berlin, Germany. (Photo by Maja Hitij/Getty Images)

I carry no torch for the hairdressers and barbers of Ireland. Anyone who has seen my by-line picture will quickly conclude they do not play a big part in my life. And the news that hairdressers are to reopen immediately in Spain and Germany may seem of little consequence. But it isn’t.

It is definitely worth asking why some countries have put hairdressing at the top of the list of businesses that can restart immediately, whilst we currently see them reopening during phase four of the lockdown easing; sometime in late July.

It is all too tempting to attribute the different national approaches to cultural stereotypes; our ‘oh so vain’ southern European counterparts, the Spanish and the Portuguese, taking foolish risks in order to look good. Even the hard hit Italians are only going to hang on another month such is their vaninty. The foppish French are going next Monday; quelle surprise.

So far so xenophobic. But what about the cold calculating Germans? They have also reopened hairdressers from the get go. Or the no nonsense Danes? They have been trimming their blonde locks for the last two weeks.

If there is a common thread, it is that in all these countries the decision has not been taken lightly. It is simply impossible to cut someone’s hair and maintain a safe social distance. Even with everybody involved wearing masks and gowns you would be hard pressed to think of a more effective venue for spreading a highly contagious airborne disease than a barbershop or hair salon.

We can be pretty confident that the medical advice in all these countries was not in favour of letting hairdressers reopen but other heads – presumably politicians – prevailed. We can only assume that they concluded it was a risk worth taking in order to get the public to buy into the long and difficult process of exiting lock down.

So why are we different? One thing is for sure: you only have to attend a Zoom meeting to recognise that the nation is in the middle of a coiffeur crisis. Between grotty beards and grey roots, we have really let ourselves go.

It is equally true that being allowed get a hair-cut would lift a lot of people’s spirits. You would not have to look far beyond your Zoom pals or even closer to home to find otherwise law abiding citizens currently weighing up the pros and cons of having their hairdresser sneak in over the garden wall some evening.

What seems to be different here is that medical advice prevailed. And that would seem to be in keeping with a lot of the criticism – albeit mild – being levelled at the Government about being too medically led.

Few would argue that letting our medical experts take the lead in supressing the virus was the right thing to do. And the structure that evolved around this process – namely the medic-dominated National Public Health Emergency Team (Nphet) – is still calling the shots it seems.

But we are entering a different phase and the public mood has changed perceptively. It would be a serious misstep to assume that the level of compliance we have seen here to fore will continue. The spike in road traffic over the bank holiday weekend is all the warning that is needed that people are getting fed up.

It is a cliché to say that doctors suffer from a God complex, but there is more than a whiff of the magisterium off Nphet. They don’t seem to have grasped that from here on out the public will need to be persuaded to comply with restrictions rather than merely commanded to obey. That is where politicians come in. And that is where hairdressers come in.