When a scientist’s love life is bigger news than Covid-19 deaths, something is wrong

Prof Neil Ferguson and his girlfriend broke UK lockdown rules. But he’s not a politician 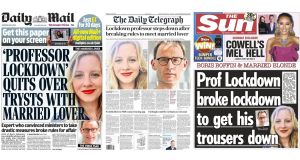 On Tuesday the UK’s death toll from coronavirus passed 32,000, overtaking that of Italy. But if you were getting your news from certain sections of the UK media on Wednesday morning you’d have had to wade through breathless reporting on a scientist’s love life to hear about it.

The question isn’t whether Prof Neil Ferguson should have resigned after breaching social-distancing guidelines to meet his non-live-in partner, but why is his love life more newsworthy than his country’s spiralling Covid-19 death rate?

Take a bow, Daily Telegraph, Daily Mail and Sun – to which special mention goes for its “Prof Lockdown broke lockdown to get his trousers down” splash.

Neil Ferguson’s behaviour was unwise. But it was not even a fraction as unwise or as bad an example as, say, Boris Johnson shaking the hands of coronavirus patients on hospital wards

Yes, Ferguson failed to follow social-distancing guidelines by having his girlfriend in his home during the lockdown, but he is a scientist, not a politician. He didn’t decide those rules. His behaviour was unwise. You could even argue that it set a bad example to the public – once it was helpfully made public by the Telegraph, that is. But it was not even a fraction as unwise or as bad an example as, say, Boris Johnson shaking the hands of coronavirus patients on hospital wards.

To roll back, Ferguson – in case you’ve forgotten during the roughly 17 years that have passed since the start of the pandemic – is an epidemiologist at Imperial College London. A professor of mathematical biology, he is the director of the UK Medical Research Council’s Centre for Global Infectious Disease Analysis, whose projection of 250,000 deaths in the UK if there were no change in strategy altered the course of its response to the pandemic. It also changed thinking in the United States.

Yesterday he resigned from Sage, the British government’s scientific advisory group for emergencies, after admitting to a newspaper that he “allowed” a woman he was in a relationship with to visit him twice during the lockdown. He had recovered and come out of self-isolation after testing positive with Covid-19, and the woman’s husband was reportedly sick at the time.

How is your love life surviving Covid-19?

Quite astonishing the way Neil Ferguson was thrown under a bus to ensure yesterday's real headline news - the UK having more #COVID19 deaths than any other country in Europe - no longer dominates the front pages.

“I accept I made an error of judgment and took the wrong course of action,” he told the Daily Telegraph, which first reported the story, and whose reporting makes it clear where it stands on the need for a lockdown.

“I acted in the belief that I was immune, having tested positive for coronavirus and completely isolated myself for almost two weeks after developing symptoms. I deeply regret any undermining of the clear messages around the continued need for social distancing.”

Of course, Ferguson was ill advised to behave as though there were one set of rules for him and one for everybody else. He should not have breached social-distancing guidelines. Rightly or wrongly – wrongly, I would say – he resigned. And that’s really all any of us needed to know about the private life of a scientist who gave his advice in good faith, and probably saved tens of thousands of lives.

But of course the reporting – I’ll say it again: released the same day as the UK’s death toll overtook Italy’s – didn’t stop there. The Telegraph and the tabloids that jumped on the story went far beyond sketching out the details of his infraction, veering into puritanical tut-tutting and spilling the salacious details of his relationship with a woman who has a family of her own, and is not a public figure in the same way.

The coverage begs serious questions about what the priorities of the media should be in a country where the confirmed coronavirus death toll has just become the second highest in the world, after the US

The reporting widely referred to her his “married lover”, shared details of how much her house is worth and speculated about her “hardly conventional” relationship with her husband – collective gasp from Telegraph-reading corners of Middle England – based on the accounts of “friends”.

It begs serious questions about what the priorities of the media should be in a country where the confirmed coronavirus death toll has just become the second highest in the world, after the US.

It also shows that even in a crisis of this scale, misogyny is flourishing. Why are women so often made responsible for men’s perceived transgressions? Ferguson’s girlfriend also breached social-distancing guidelines, but she wasn’t the one whose advice led to them being created. He has some public profile, and his private life is arguably – very arguably – in the public interest. She had none at all. And yet the original front-page splash in the Telegraph included a three-column-wide photograph of her, while the Mail and Sun led with her photograph and relegated Ferguson himself to a thumbnail.

As a palliative-care doctor in Oxford, Rachel Clarke, noted on Twitter, it’s “quite astonishing the way Neil Ferguson was thrown under a bus to ensure yesterday’s real headline news – the UK having more #COVID19 deaths than any other country in Europe – no longer dominates the front pages.”

Unfortunately, given the record of misogyny and salacious reporting by some of the UK press, it’s entirely, grimly predictable that his partner was.