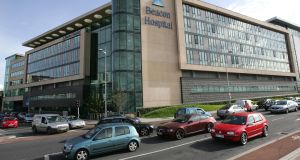 The Beacon Hospital, Sandyford, Co Dublin. Private hospitals have agreed to provide their facilities on a not-for-profit basis to help deal with the surge in coronavirus cases that is expected over the next two weeks and beyond. Photograph: Matt Kavanagh

There is a famous quote from Aneurin Bevan, the postwar British Labour politician who is seen as the father of their national health system. When asked how he got the medical profession to go along with his plan, his answered:“by stuffing the doctors’ mouths with gold”. It was a reference to allowing some doctors in the new NHS to still see patients privately. The anecdote has become shorthand for the self-interest that often overrides the moral imperative on doctors to give priority to the public good.

It was hard not to think of Bevan on hearing the Irish Hospital Consultants Association (IHCA) warning of the dire consequences of their members not being allowed to see outpatients as a result of the private hospitals they work in being co-opted by the HSE. The hospitals themselves, to their credit, have agreed to provide their facilities on a not-for-profit basis to help deal with the surge in coronavirus cases that is expected over the next two weeks and beyond. The offer – which we are told came from the hospitals and not the Government – may be enlightened self-interest as much of their bread-and-butter business will have disappeared. Who wants to get a tummy tuck right now? But it’s welcome all the same.

The 600 or so consultants who were supposed to come with these hospitals, however, are declining to sign contracts with the HSE on the basis that they will not be allowed to continue to see private outpatients in the hospitals. They argue that this will have detrimental consequences for “many who have serious conditions which need ongoing attention and some will deteriorate if care is not available”, according to the IHCA.

“Many” and “some” are words people use when they don’t have accurate figures and often translate as “not a lot”.

We have been repeatedly told that if things get bad some very hard choices will have to made about who gets what care. The decisions will be about who gets beds in intensive care units, but will ripple across the service and have consequences for other patients including outpatients.

Whoever makes these decisions will be guided by medical ethics which are meant to ignore the patient’s ability to pay. And they will be made by doctors in the public hospitals and the newly co-opted private hospitals and in many cases these could even be the same doctors just standing in different bits of the same hospital complex.

To imply that a different set of ethics should apply in private hospitals – or in the private wings of public hospitals – does not make a great deal of sense and the 600 or so consultants, looking to exempt their private business from the great national effort to save lives, should be wary of making arguments that imply they are looking out for anyone’s interest but their own. They would do well to reflect on the fact that more than 300,000 people have lost their jobs so far in this pandemic. They are merely being asked to take a temporary pay cut.

In any case, the consultants concerns seem a little overdone. If all goes well, the crisis and thus the demand on the private hospitals will peak in a couple of weeks and then start to abate. It is hard to believe that in the national hour of need private consultants can’t put most of their outpatient work on hold as they presumably do when they are on holidays?

And, presumably, if one of their outpatients does need urgent attention some sort of work around can be found as is presumably currently the case for outpatients in the public system.

No doubt plenty of private consultants have rolled up their sleeves and pitched in to help for no reason other than common decency and a sense of duty.

But you would have to wonder if what this fight is really about is concern over what happens if this crisis drags on in the autumn or longer and the viability of the whole private medical industry in Ireland is called into question. What happens if the State decides it wants to hang onto these hospitals and the consultants who go with them for a bit longer? Even if things go as well as they possibly could this summer, the waiting lists that strike fear into the heart of any politician at the best of times, will have multiplied. And that’s before the winter trolley crisis.

At lot of things that seemed inconceivable a few weeks ago are now more than possible and the IHCA knows it.

1 Trump turns to bible for photo op as DC burns around him
2 Covid-19: Easing of restrictions ‘unlikely’ to be speeded-up
3 Normal People: Full-frontal nudity was not its most radical feature
4 Body of missing five-year-old recovered from Lough Mask, Co Mayo
5 ‘Frustrated and angry’: Thousands march in Dublin to protest death of George Floyd
Real news has value SUBSCRIBE