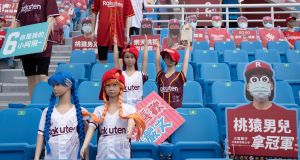 Dummies and cardboard cut-outs replace fans during a game between the Rakuten Monkeys and the CTBC Brothers at Taoyuan International Baseball Stadium in Taiwan on Saturday. Photograph: Ashley Pon/The New York Times

Taiwan may have successfully contained coronavirus but it is still hunkering down for the long haul.

The Taiwanese government said it was trying to reopen the country’s borders gradually for some “important economic activity” that could not be conducted remotely. But Chen Shih-chung, the health minister, said on Wednesday that the country was not even close to discussing a broader lifting of an entry ban on foreign nationals imposed to keep the disease out.

Taipei’s caution serves as a stark reminder of the difficulties countries face when mapping exit strategies from epidemic prevention regimes, just as governments in Europe, some US states, Australia and New Zealand attempt to ease lockdowns.

Taiwan has become a global role model for its handling of Covid-19 as it has only 439 confirmed cases and six deaths. Early screening of arriving travellers and border closures, thorough contact tracing and meticulous quarantine measures helped contain the virus before it could spread in the community.

That helped Taipei avoid the lockdowns governments from China to Europe to the US were forced to impose.

Mr Chen said that partly because of this success, the barrier for Taiwan’s return to normality would be particularly high. “It is hard to imagine,” he said in response to a question whether a return to normal cross-border travel was possible this year.

The possibility of reopening Taiwan to foreign travellers depended on when a safe vaccine or drug for treatment of the disease becomes available, said Mr Chen.

“So far, potential vaccines are still not safe enough, and that may continue to be an issue for quite some time,” he added. “While a country with a high infection rate and a high death rate [from coronavirus] may consider using such a vaccine, for Taiwan with its very low infection and death rates, that is not an option.”

A few sports and cultural events, suspended since March, will therefore be allowed gradually to resume, albeit at a smaller scale than usual. As a first test, Taiwan’s Chinese Professional Baseball League, which has been in action since last month but has been played in empty stadiums, will admit 1,000 spectators to each of Friday’s two games.

Bringing back sports and culture was a vital part of a “new life under epidemic prevention”, Mr Chen said. – Copyright The Financial Times Limited 2020